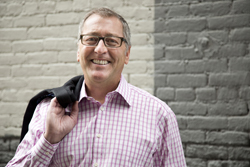 Denver—KTGY Group, Inc., Architecture + Planning, has added Terry A. Willis, AIA, LEED AP, as a principal in the firm’s Denver office. With more than 30 years of design practice, Willis’ experience and project leadership has successfully guided a broad range of development projects to completion including high-profile commercial, retail, residential, entertainment and resort projects. Willis most recently served as a senior architect with Short Elliott Hendrickson, Inc. (SEH) in Denver and as associate principal and Denver studio manager of 4240 Architecture, Inc.

Willis has been responsible for some of the most notable building and construction projects in the Denver metro area including East 29th Avenue Town Center at Stapleton in Denver; St. Julien Hotel & Spa in Boulder; and the 200 Fillmore repositioning in Denver’s Cherry Creek North.

Willis was recruited to Denver to start his career with Skidmore Owings & Merrill (SOM) after graduating from The Ohio State University. After fourteen years of design and management experience with SOM as project designer, team leader and field office manager of major national and international projects, Willis joined Urban Design Group in 1994, now 4240 Architecture. Willis has lived and worked in Barcelona and Manila and executed projects in Hong Kong, Singapore, Bangkok and Pakistan.

In addition, the Denver office of KTGY is excited to break ground on its first Hawaii project, Kapolei Lofts, a 500-unit community with 10,000 square feet of retail, with Forest City Hawaii; and a mixed-use podium project, Route 40, located at Colfax Avenue and Downing Street in Denver, consisting of 6,700 square feet of retail and 102 units of apartments.

Willis graduated from The Ohio State University with a Master of Architecture and a Bachelor of Science in Architecture, Cum Laude. He is a licensed architect in Colorado and a LEED (Leadership in Energy and Environmental Design) Accredited Professional. He is a member of the U.S. Green Building Council, American Institute of Architects (AIA), Urban Land Institute (ULI), East Washington Park Neighborhood Association Zoning Committee, and the Civic Center Conservancy Design Committee. He is actively involved in AIA and has served on the Board of Directors for the Denver Chapter, and as the Urban Design Committee Co-Chair, as well as on the Transit-Oriented Development (TOD) committee of ULI.