How Much Money Is Your Multifamily Community Losing?

“How much money do you estimate was lost?” We put this question to a multifamily owner whose communities total nearly 500 units. His answer was shocking. “Nearly $200,000 over three to four years.” Our next question was obvious: “How?”

“It was very difficult to identify,” the owner replied. “Each year, the amount of money we paid for our master-meter water and sewer bills increased, but the amount we recovered from our resident utility billing program slowly decreased. We relied on a billing provider to manage the process for us, but the losses happened gradually enough that we didn’t catch the errors.”

When the owner investigated more closely, he discovered that his local water utility had increased the master-meter water/sewer rates several times, but the resident bill calculations had not been updated with those rate changes. The owner was continually paying more for utilities but collecting less.

While this is an extreme example of what can happen when resident utility bills are calculated inaccurately, it also exposes two very common problems in multifamily utility billing: under- and over-billing. These problems can create significant financial losses for owners or lead to aggravated residents.

Under-billing usually occurs in submetered communities when the master-meter rates increase, but those rate changes are not carried over to resident bills. It can also happen when common area deductions (CADs) are higher than necessary, or when legally billable fees–e.g., emergency medical services, stormwater charges, fire services–are not charged back to residents.

Small losses add up quickly. For example, if you operate a 300-unit complex and you under-bill residents as little as $5 per bill for a year, you’ve lost $18,000. A thousand here, a thousand there, pretty soon you’re talking about real money.

Over-billing is most likely to happen when:

–    Owners fail to subtract CADs or other unbillable expenses from the master-meter bill, and charge residents more than they should
–    Owners receive a lower commercial utility rate and then bill tenants at a higher residential rate
–    Owners charge a higher service fee than what is legally allowed.

Over-billing puts the owner in the undesirable position of “profiting from the sale of utilities.” It also gives discontented residents justification for filing complaints with a Public Utility Commission (PUC) or sharing their grievances with local media.

To simplify resident utility billing, many owners and property managers use third-party billing companies. Be aware, however, that these service providers make mistakes. It’s recommended, therefore, that owners periodically conduct their own internal audit to ensure that bills are being tallied properly.

To conduct a quick and simple audit, it’s important to:

1.  Know the rules of the game. Before starting an audit, familiarize yourself with the state and local rules that govern how you can bill residents for utilities. These rules can be found at your state’s PUC or at a local National Apartment Association (NAA) Affiliate.

In Colorado, for example, assuming there’s a proper lease in place, owners can charge 100 percent of the master-meter bill back to residents. In Texas, however, owners must deduct a portion of the master-meter bill for common areas and other non-resident utility costs such as those for parking lot lighting, pools, hallway heating and air conditioning, etc. Texas also has specific rules on how much of a service fee can be charged.

Understand that the onus is on the owner to ensure that resident bills are calculated correctly, regardless of whether you outsource to a third party billing provider or manage the process yourself.

2.  Collect relevant billing data. Gather the master-meter billing data for at least the last 12 months and the amounts billed to residents for the same period. A comparison of this data will help you gauge how your utility billing program is performing.

3.  Build a spreadsheet and graph the data. A spreadsheet makes it easier to graph the billing data so that you can visually spot anomalies. For example, assume you’re reviewing water/sewer charges. Create a spreadsheet with six columns and twelve rows. Enter the following column headings: 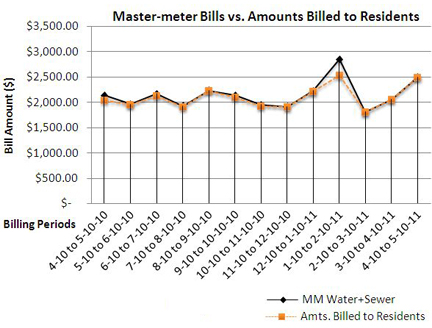 1.    Billing Period – (from the master-meter bills)
2.    Complex Usage – total water consumption for the complex (from the master-meter bills
3.    Master-meter Water + Sewer Bills – total of all fees billed to the owner (legally billable to residents).
4.    Amounts Billed to Residents – (from the monthly billing summary reports).  Note:  Be sure to subtract resident service fees and other non-billable charges.
5.    Resident Billed Usage – (from the monthly billing summary reports)
6.    Usage Difference – this column subtracts the Resident Billed Usage from the Complex Usage.

The figure at right shows trend lines that compare what the owner paid to what was billed. 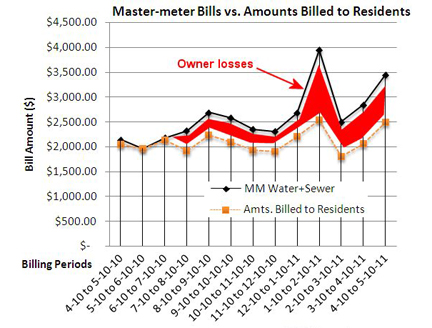 The lines are tightly coupled which is what you’d expect if the billing is accurate. The one deviation that occurred in January-February 2011, was a water leak in an apartment unit that management elected to pay.

An example of a classic under-billing situation is shown below.

Notice that these lines diverge over time as the owner continues to under-bill.

Billing errors, and the financial and resident problems they create, are entirely preventable. Periodically comparing master-meter charges to resident billing amounts will help owners and property managers crosscheck the accuracy of their utility billing programs. It also gives owners peace of mind that this important aspect of their business is being managed properly.