The project offers a model for revitalizing outdated retail plazas, say its developer and architect.

Community Development Partners embarked on the ambitious venture of revitalizing an auto-oriented retail center into a community-centric, mixed-use property. Situated in the heart of Santa Ana, Calif., and renamed La Placita Cinco, the project brings much-needed affordable housing to the area, along with varied community spaces, all while keeping the original retail tenants in place.

Formerly known as Tiny Tim, the site is part of a neighborhood that hasn’t seen significant investments in the past 50 years. The plot—located near a new light rail line along 5th Street planned by the city—now includes 51 affordable units, 148 parking spaces and outdoor community areas. The outdated facades of the two existing retail buildings were renovated, and a new structure was added on the southwest corner of the site. This new three- to four-story building contains the residential units, along with ground-floor community space. City Fabrick acted as design architect, while TCA Architects served as executive architect for the project. 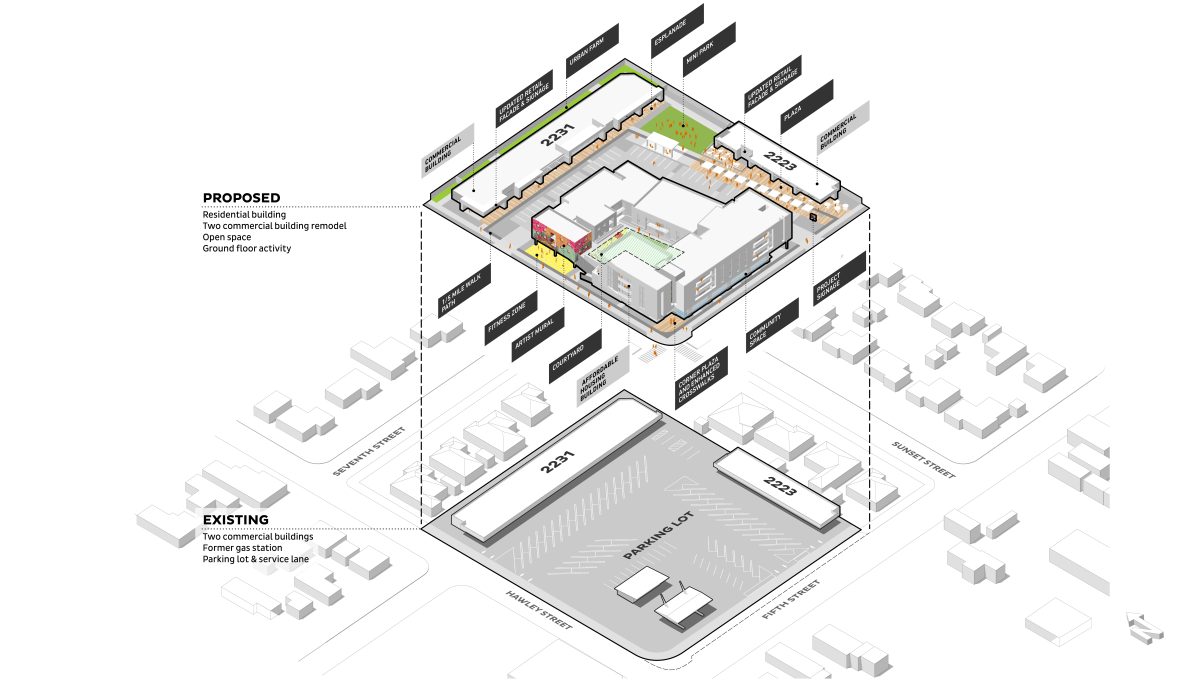 The project was completed in spring 2021 with help from several entities. Funding for La Placita Cinco included 9 percent LIHTC equity from R4 Capital, as well as $6 million through the City of Santa Ana’s Low- and Moderate-Income Housing Asset Fund and Inclusionary Housing Fund. The project also received construction financing from Citibank and long-term debt from Freddie Mac. Additionally, the Wells Fargo Foundation offered up a grant to help specific businesses rebrand.

Where did the revitalization plan for Tiny Tim originate from, and how did the company get involved in the development?

Paine: Magis Realty—a developer and broker we partnered with—brought us the site, with a caveat: The retail would need to stay in place given the long-term lease of a tenant.

Initially, we thought the retail would be separate from the affordable residential development, split into two parcels and under separate ownership. As we dug into the site, considered different funding scenarios and following multiple meetings with the community, we realized we could keep the retail as part of a tax credit financing execution and use its income to help fund the overall revitalization.

The goal became uplifting the long-term retail tenants and improving their businesses, while integrating the retail into the affordable residential development. For the residential portion, we targeted low-income families from the start, given the massive need for family housing in the city.

The design concept stemmed from the site’s proximity to the future Santa Ana Streetcar, the demographics of the neighborhood and the goal of creating a development for the existing residents of Santa Ana—specifically the Artesia Pillar neighborhood.

What makes this project stand out?

Paine: La Placita Cinco is a successful example of integrating much-needed affordable housing into an existing residential neighborhood by leveraging underutilized commercial properties. The project demonstrates the ability to increase the land’s value to the community by transitioning an auto-oriented, low intensity, single-use commercial property into a walkable and inclusive mixed-use neighborhood center.

What were the main challenges you encountered throughout the development process? 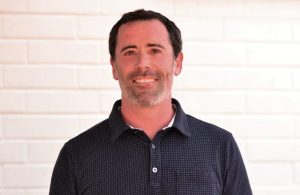 Paine: Much of the challenges for developing the prototypical auto-oriented commercial center into a neighborhood-serving mixed-use hub came from leveraging the site’s existing physical and economic conditions to create a cohesive community, while also elevating the economic opportunity for those local businesses already located there.

The development team had to collect a robust financing package to support not only the creation of the affordable housing component, but also to rehabilitate the commercial center and create an expansive menu of community amenities.

Construction phasing and staging also required sensitivity and creativity, with constant communications between the development, design and construction teams as well as property management, the community and on-site businesses. Staging and construction routes were shifted as to maintain access to the businesses throughout the duration of construction, a task that had been further complicated due to the COVID-19 pandemic. 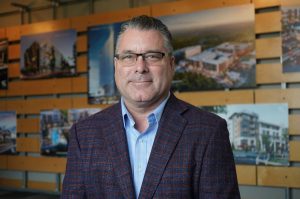 Mustard: The fact that we were able to keep the existing business open during construction was one of the most challenging aspects of this project but, also, one of the most rewarding.

The commercial buildings are reinvigorated with the complete transformation of the building facades that includes new architecture, signage and upgraded accessible pedestrian access. Renovations also addressed long-deferred maintenance of the buildings, including repairs to the roof and mechanical and electrical systems.

How did the health crisis impact the construction process and the final project?

Mustard: During the pandemic, there was a loss of foot traffic in all retail developments. It didn’t stop entirely, and the challenges were the same regardless. Keeping the tenants and prospective patrons safe during construction was the most important aspect of the project. Using protective barriers and phasing in different parts of construction helped keep the businesses open and the patrons safe.

Special attention was paid to creating more outdoor space than normally. Built into the project’s new DNA is a wellness program that includes a walking path, outdoor gym, fitness studio, garden and community space for social service provider Mercy House to operate from.

In what way does the project benefit the larger community?

Mustard: The old strip shopping center was redesigned to support active uses with wide, landscaped plazas along the retail facades. This has allowed businesses to extend their operations outdoors, to include outdoor dining, and to support pop-up programming such as farmers markets and special events.

Between the two retail buildings, a mini park is programmed to accommodate a variety of uses like fitness classes, farmers markets and concerts. The former service alley has been transformed into an urban farm, providing farm-to-table produce for several on-site businesses.

La Placita Cinco leverages the diverse commercial amenities already existing among the tenants, including a restaurant, bakery, market, butcher, salon and laundromat to tend to the community’s daily needs. This has effectively created a neighborhood main street, and isn’t that what every community needs? 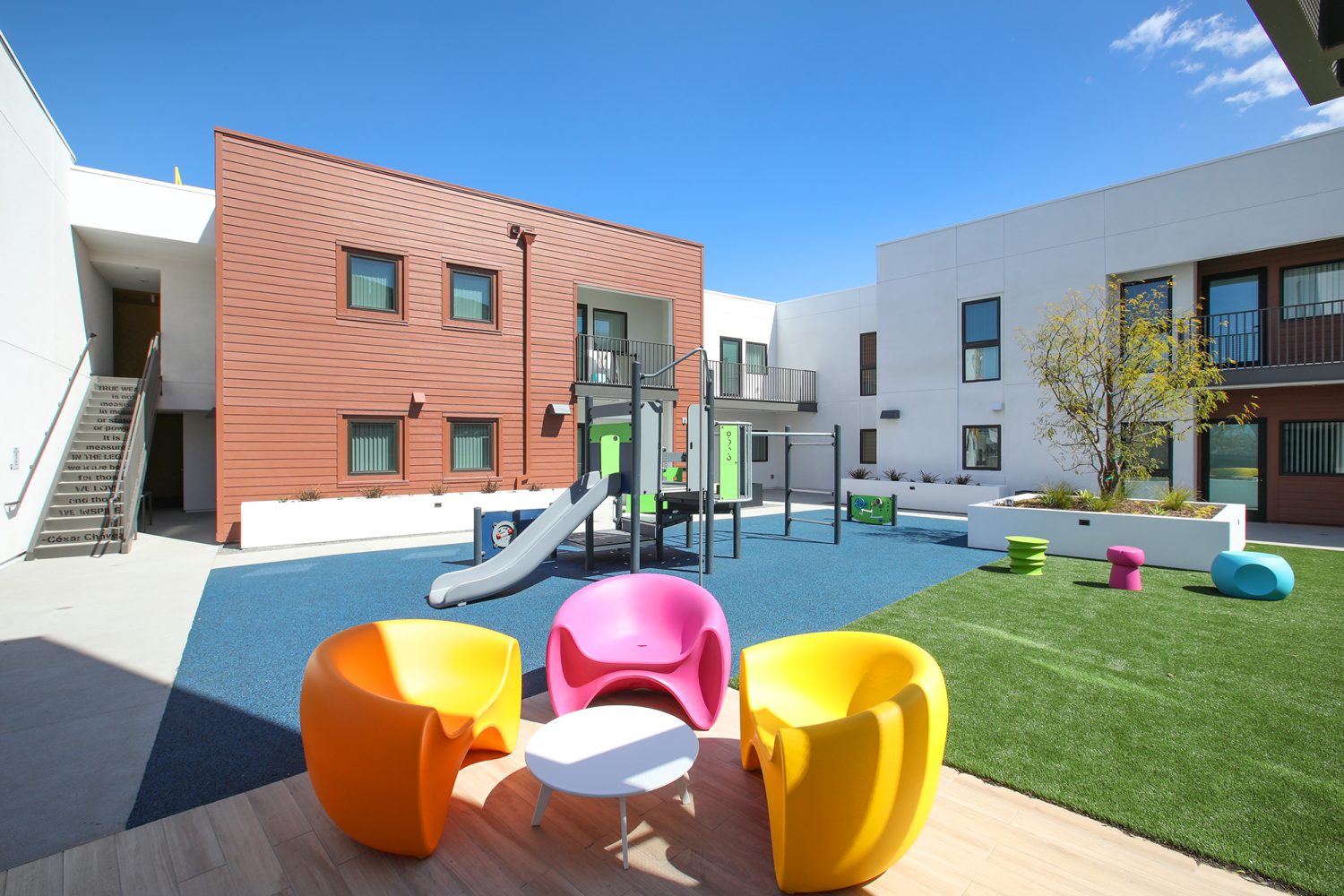 Neighborhoods are the fabric to keeping families safe within the context of friends and family we can trust.  While growing up, our parents would say “go play, just don’t play in the freeway.” The translation was “stay in the neighborhood because we know and trust these people, we don’t know the people transversing through the neighborhood via the freeway.”

This project benefits the overall neighborhood for two reasons. First, the neighbors have a say in the development of future projects, and they should. Second, because they are vested in the approval process, they now have a trust built into the project once its built. Now, when little Johnny says to mom “I’m going to play with Timmy at La Placita,” mom knows where Johnny is, and can trust he is safe.

What are some of the sustainable features of the development?

Mustard: The former Tiny Tim Plaza was an impermeable 2.3-acre site complete with a dark surface asphalt parking lot encompassing two thirds of the overall area. The project reduced that paved parking area to a small fraction of its former self, replacing it with landscape areas, permeable surfaces, buildings and sustainable stormwater management facilities that retain and treat all runoff on-site.

Bioswales help keep water on site and filtered before it seeps into the aquafer or travels into the storm drains. Measures such as replacing the asphalt parking with smaller parking areas using off-street parking and additional open green space, help mitigate heat gain within the microclimate once created by a sea of on-site parking.

The new apartment building will also be LEED certified, although this is still pending.

Could the project serve as a prototype for revitalizing underutilized retail strips in other areas of the country?

Mustard: Yes, The New York Times and The Wall Street Journal reported there are an estimated 70,000 similar auto-centric strip, or neighborhood-serving centers, similar to La Placita Cinco. This project serves as a great proof of how we can revitalize these typically overlooked smaller parcels … We have lots of these types of parcels throughout the nation. We believe they are ripe for redevelopment, especially since we’re out of land and these are often derelict or defunct, and in desperate need of new life.

In your opinion, where do mixed-use developments fit into the future of cities?

Mustard: It is our future! As our society changes from an auto-centric nation to a more pedestrian- and bicycle-centric society, mixed-use environments will thrive as the new cultural hub of neighborhood developments. That’s why we get up in the morning, why designers and architects love to collaborate on the next big idea. We love thinking about how our built environment can help a society thrive, developing safe environments where the next generation of dreamers will change the way we live, work, shop and fellowship.