The company partnered with Paragon Group and First Florida for one of the biggest single-family rental developments in the metro. 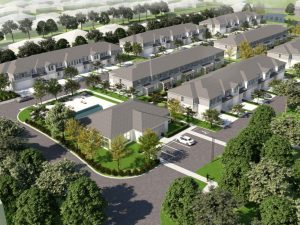 A partnership between Wolfson Development Co. and Paragon Group has broken ground on Encanto Isla, a 214-unit built-to-rent project in Buena Ventura Lakes within the Orlando MSA. First Florida is the general contractor of the development.

Spanning 25 acres, the project is set to include townhomes with attached garages and private yards across two neighboring communities, Encanto and Isla. Plans also call for a fitness center, a swimming pool, a business center, a clubhouse, walking trails, as well as picnic areas.

Located at the intersection of Buenaventura Boulevard with Buttonwood Drive, the community will be within a mile of the Town and Country shopping mall and several retail and dining options. Florida State Route 441 will be some 4.5 miles northwest of the property, connecting it to Orlando. Residents will also have access to several green areas, such as Buenaventura Lakes Community Park.

Encanto Isla represents Wolfson Development’s second large-scale BTR project after Cantabria, which encompasses 172 townhomes and 12 single-family homes in Bradenton, Fla., and is currently under construction. In the same city, the company is also working on Symphony Lakes, a 36-acre project that will include a 220-unit BTR community.

In the past year, several large SFR projects were announced in the Bradenton area and in other Florida cities. RangeWater Real Estate broke ground on Annalise, a 186-unit BTR project, while Middleburg Communities and Parse Capital started construction at The Hamlet at Wildlight, a 250-unit SFR development in Jacksonville, Fla.