As the frequency and intensity of catastrophic natural disasters increase, the real estate community has shifted a focus on how to build and retrofit cities to withstand their impacts. 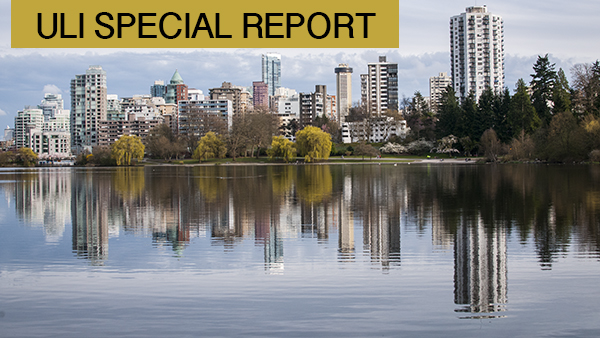 Vancouver—As the frequency and intensity of catastrophic natural disasters increase, the real estate community has shifted focus on how to build and retrofit cities to withstand their impacts. Some of the leading thinkers met this week at the ULI Spring Meeting in Vancouver to discuss how developers, municipalities and the public can initiate plans to mitigate the damage and bounce back quickly from events like floods, draughts, hurricanes, tornadoes and wildfires.

Richard Barkham, group research director at Grosvenor Group, defined resilience as the ability of a city to avoid or bounce back from an adverse event. His group published a report this week rating the world’s most and least resilient cities. The highest scoring cities had low vulnerability to climate, environmental, resource, infrastructure and problems, as well as high adaptability resulting from government, planning, funding, technology and local institutions.

“These cities that don’t have a resiliency offer are going to begin to find themselves rationed as far as capital is concerned.” Barkham says. “They simply are not going to be able to access the global capital flows.”

These sentiments were echoed by John McIlwain, senior resident fellow and J. Ronald Terwilliger chair for housing at ULI, who added that property values have begun to reflect their resiliency.

“Some property values are rising because they are located in places that are resilient,” McIlwain says. “Some are going to go down because of changes in building codes or zoning. Appraisers are going to start taking this into account. Lenders are going to to have to take into account the likelihood of catastrophic events at your property going forward.”

McIlwain added that developers and investors will keep close tabs on flood maps that are evolving as scientists update their sea level projections. Navigating the lines as they are drawn and redrawn in a dance between scientists and politicians will prove no easy task. The real estate industry has its own innate challenges due to the nature of forward planning. Projects generally take between three to five years from inception to completion, but appraisers and lenders are starting to think about site conditions not just in 2020, but out to 2030 and 2040. One thing we can expect, according to ULI’s new white paper on creating resilient communities, is an increase in uncertainty as extreme weather events become the norm.

Jeffrey Alpaugh, managing director and global real estate practice leader at risk management firm and insurance brokerage Marsh & McLennan Cos., presented some striking data on just how important resiliency is. Ten of the 12 most costly hurricanes in insurance history occurred in the past nine years. In addition there is a clean upward trend in both insured and overall loses over the past 30 years.

“Windstorms in general are responsible for over 75 percent of catastrophic loses from 1993 to 2012,” Alpaugh says. “Part of this is due to how coastal exposure has grown over time. In 2012, New York surpassed Florida in having the greatest amount of total insured value on coastal exposures. The total insured value over time has significantly increased. Texas is very exposed as well.”

According to Alpaugh, underwriters are focused on the potential impact of wind storms in the North East in the wake of Superstorm Sandy. Investors are even starting to ask about the maximum impact wind damage can have on their portfolios. The risk presents a major concern to lenders as well.

“The insurance industry has weathered the storm and rates are steady,” Alpaugh says. “As we sit right now the industry is incredibly capitalized and there is a tremendous amount of supply.”

When it comes to preparing local municipalities to avoid major loses, a great first step is creating a culture that supports resiliency. Susan Anderson, director of the City of Portland Bureau of Planning & Sustainability, added that resiliency is something that everyone can understand and get behind.

“There is a much wider desire to move on this quickly,” Anderson says. “Resiliency is something that most communities understand as a core value. While you can always regulate, and get the codes right and look at zoning, another effective route is pushing the market in the right direction by recognizing business and residents that are doing the right thing, which has proven tremendously effective in the green building arena.”

One of Portland’s successes on the resiliency front has been a program to incentivize the weatherization of homes. While the population was hesitant to pay the cost upfront, the program allowed residents to pay over time through their utility bill. There is a now a similar pilot in place for seismic retrofits. Portland has also saved $60 million on a separating storm water from swears by combining green infrastructure with grey infrastructure instead of going with just a traditional piping route.

But Anderson points out that resiliency goes beyond the physical space and into the neighborhood. Her department has developed a tool to map the city’s 90 neighborhoods on a set of factors including sidewalks, proximity to transit, bike paths, schools, proximity to retail and food carts. The goals is to understand how people might need to access services should a huge storm knock out power and road access. This tool has been shared with Memphis, and Anderson believes that trading resources across municipalities in imperative for resiliency initiatives. Based on how our government functions, Anderson also feels that cities are the first step to a national resiliency program.