A new study from CityRealty examines Trump-branded residential buildings in Manhattan and the speed at which their value decreased following Trump’s run for the White House.

Donald Trump has long been in the public eye, starting from his years as a real estate mogul to his current political career. Amidst new laws, tax regulations and disputed tweets, has the image and the value of the properties bearing the Trump name suffered along the way?

CityRealty put together a report that analyzes the 11 Trump-branded residential assets in Manhattan. Each property is ranked between 1 and 10 based on the number of sales it has seen every year, location and performance of similar condos in the area. 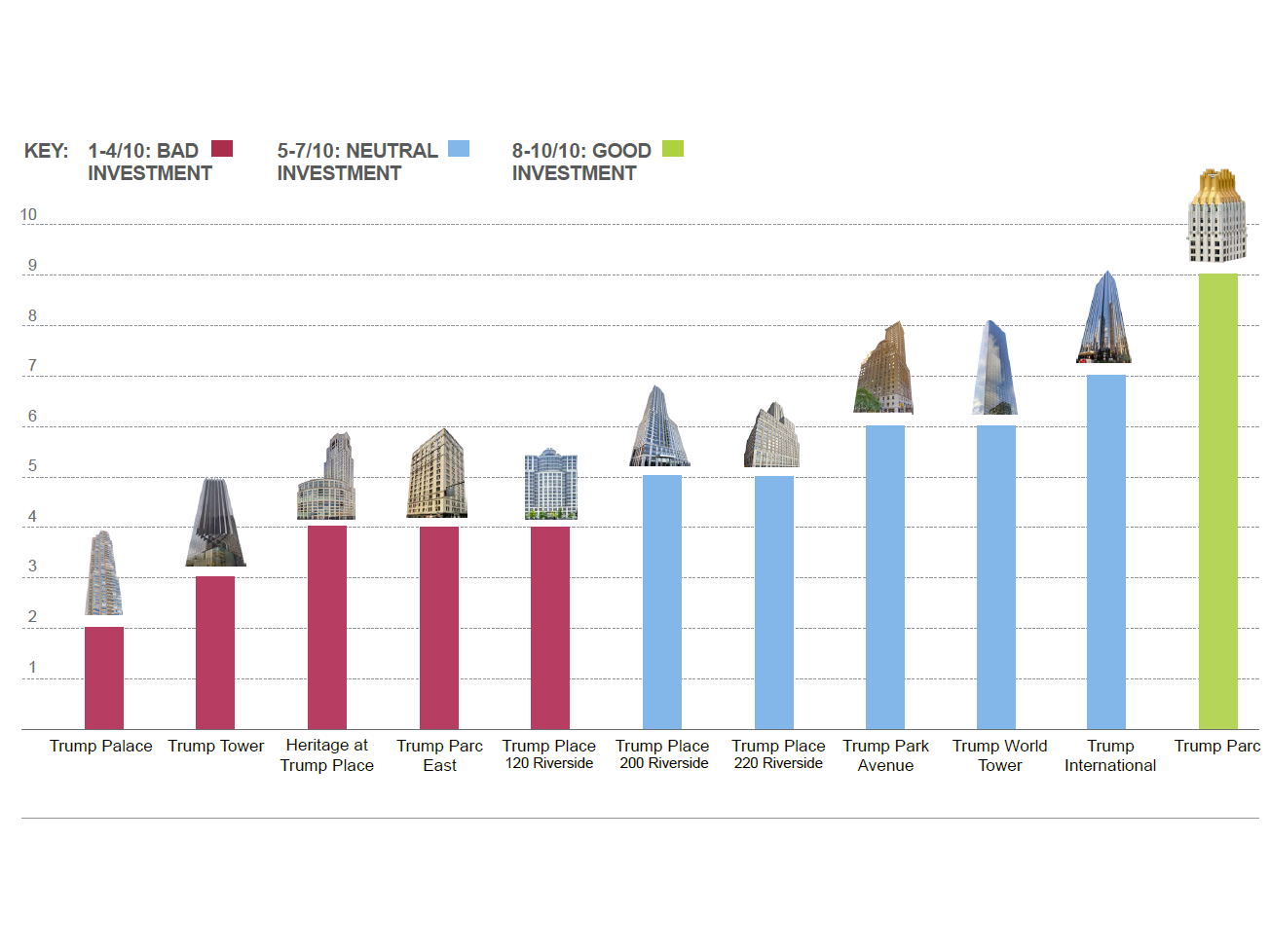 The highest-ranking property was Trump Parc, a 340-unit, 1988-built tower located steps away from Central Park. Although the price per unit saw a spike in 2013 and 2014, the property’s overall value was and continues to be considerably below the median price of luxury condos. Investment-wise, the report finds five buildings as neutral. The only building that posed higher average prices than most Manhattan luxury condos was Trump International, while Trump World Tower and Trump Park Avenue were on the same page with nearby luxury condo buildings. Trump Place I and II recorded lower prices than the average Manhattan condos.

The remaining five properties are considered a below-average investment due to their skyrocketing prices, reduced sales activity, as well as a lawsuit involving Trump’s name on Trump Place at 200 Riverside Blvd. Trump Palace ranked at the other side of the spectrum, as the average sale price of the 275-unit property saw an 8 percent dip since 2007.

Manhattan saw a decrease in apartment prices in the last quarter of 2017, and Trump-branded condos were no exception. Although marketed as luxury properties, their prices have seen a gradual decrease over the years. The aging assets failed to keep up with the competition—newer buildings, which provide residents a wide array of best-in-class amenities and services.

Over the last decade, Manhattan luxury condos saw a 56 percent price increase and 51 percent across all condos, while Trump condos recorded a modest 14 percent growth. Last year, Trump apartments sold for an average of $1,741 per square foot, 6.6 percent lower than the average Manhattan condominium.

“Considering each building individually, there does appear to have been a discernible effect, with prices trending downward in most Trump-branded buildings over the past year,” City Realty noted.

The decrease in value of these assets is expected to continue this year as well, fueled by ongoing controversy and unrest, as well as the Secret Service at Trump Tower and protests outside Trump International. However, investors should put into balance what property has to offer and their own expectations prior to making a purchase.