The 306-unit luxury apartment building was completed in 2018. 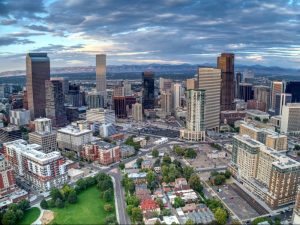 The Glenn, a 306-unit Class A luxury apartment community and the first project built within The District, a planned mixed-use development in a Denver suburb, has changed hands for $125.8 million.

Global asset manager DWS announced that RREEF Property Trust Inc., a REIT that it advises through an affiliate, was the buyer of the property in Centennial, Colo. The name of the property and the seller, Jones I MNMA LLC, were disclosed in an 8-K form filed with the U.S. Securities and Exchange Commission.

The Opus Group was the developer that completed The Glenn in July 2018. Opus broke ground on the multifamily project in August 2016 when the major mixed-use development was known as the Jones District. Brue Baukol Capital Partners, a Denver-based private equity real estate investment firm, acquired the land in late 2017 and rebranded the development as The District. Brue Baukol plans to develop 36 acres adjacent to the RTD Dry Creek rail station in Centennial into a walkable community with more than 2.5 million square feet of office space, a 200-key hotel, 1,800 residential units and more than 30,000 square feet of retail space.

The firm held a ceremonial groundbreaking in April to begin the infrastructure work on the larger development which is expected to take 10 to 20 years to build out. In July, Embrey Partners acquired a parcel to build Hensley at The District, a six-story, 304-unit luxury multifamily property. Embrey also acquired land from Brue Baukol in September to build Keene at The District, a four-story, 306-unit apartment community. Both projects are slated to be completed in 2024.

The Glenn, located at 9300 E. Mineral Ave., is six stories, nearly 275,000 square foot and situated on 4.7 acres. DWS said the apartment community was 93.5 percent leased at the time of acquisition. Amenities include a resort-style pool with gazebos, state-of-the-art fitness center with a yoga studio, outdoor community lounge areas with barbeques, fireplaces and yard games, a pet park, business and conference centers and electric vehicle charging stations.

The District is located in Centennial, a suburb southeast of Denver and west of Interstate 25. The Glenn is within walking distance of the light rail station and retail centers including Park Meadows Mall, one of Colorado’s largest shopping centers.

GREP Southwest LLC, an affiliate of Greystar, has been retained as the property manager of The Glenn, according to the SEC document.