The development planned for the city’s West Loop neighborhood is expected to deliver next year. 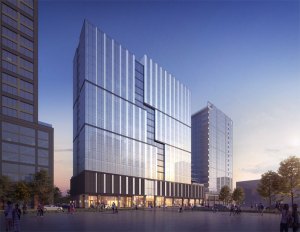 Coppia. Rendering courtesy of The Pizzuti Cos.

The Pizzuti Cos. has broken ground on Coppia, a 19-story, 298-unit mixed-use development in Chicago’s West Loop neighborhood slated for completion in 2024.

First approved by Chicago officials in 2015, the project at 1101 W. Van Buren St. was delayed by the pandemic. The Columbus, Ohio,-based family-owned commercial real estate development and investment firm received an extension of a five-year development deadline and recently filed new plans with the city that shortened the project by 50 feet, according to various media reports.

The project will be situated across from Target and next to the CTA’s Racine Avenue Blue Line station. The area is the cornerstone to the popular Fulton Market District, the Greektown neighborhood and is also adjacent to the Illinois Medical District. Multifamily development activity remained strong in Chicago for the first half of 2022, with nearly 16,200 units under construction, according to Yardi Matrix data. More than 75 percent of those projects target Lifestyle renters, the September report noted.

Power Construction will handle construction and Goettsch Partners is the design architect for the project. Village Green will provide property management services. Retail opportunities will be available on the ground floor of the building.

The Pizzuti Cos. said the building’s setting, which will face northward into the heart of Chicago, along with the design, inspired the name Coppia, which means “couple” in Italian. The design features geometric figures on the building’s façade split by contrasting glass.

The building will have studios, one-, two- and three-bedroom floorplans with floor-to-ceiling windows and city views in every apartment.

Amenities will include a sun deck with swimming pool, an outdoor bar, cabanas, private grilling stations, an outdoor fireplace and firepits with lounge seating. A 2,000-square-foot game room will hold arcade games, a professional grade golf simulator and shuffleboard. The main level will include a fitness center, clubroom, coworking space and bike storage. The property will have 24-hour concierge service and a dog park with dog spa.

Pizzuti, which has a Living with Art program in many of its properties, will include fine art in Coppia featuring emerging and established artists.

In addition to its Columbus headquarters, Pizzuti Cos. has offices in Chicago and Nashville, Tenn. Founded in 1976, the company has developed more than 60 million square feet of projects including multifamily, mixed-use, office, industrial and hospitality properties. In downtown Columbus, the company has plans for a fourth phase of its Library Park multifamily development. The newest phase would construct a new seven-story, 157,000-square-foot building with 117 apartments. The third phase was completed in spring 2022 and added a six-story, 145-unit luxury residential building to the mixed-use complex which already had 150 units.