The Adeline, the newest Manhattan condominium development from L+M Development Partners Inc., is 65 percent sold after only two months of sales. 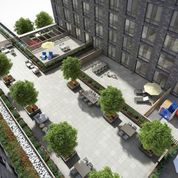 New York—The Adeline, the newest Manhattan condominium development from L+M Development Partners Inc., is 65 percent sold after only two months of sales. That was among the news emerging from a celebration called “A Taste of The Adeline’s Neighborhood,” attended by top real estate brokers converging on the building’s newly-unveiled sales gallery at 45 West 116th Street in Harlem.

The 12-story condominium, located steps away at 23 West 116th Street, will offer 83 one- to four-bedroom luxury residences ranging from 1,046 to 1,912 square feet. The full-service building will be attended by a 24-hour doorman and will feature a resident fitness room, large residence lounge with workspace, screening area, children’s playroom and kitchenette.

The Adeline will also offer two levels of shared outdoor space, with a landscaped, sun-drenched 5,800-square-foot central courtyard at the building’s epicenter. Also featured will be a 2,300-square-foot landscaped common roof deck.

“There is tremendous demand right now for new development in Manhattan,” Julia Boland, sales manager for The Adeline with New York City-based Halstead Property Development Marketing, tells MHN. “The location is ideal because you are situated six blocks from Central Park and conveniently located between the 2, 3 train on the west side and the 6 train to the east, making it an easy commute to any destination.”

Harlem has come to be seen as a destination neighborhood, she adds. “Over the past seven years a number of large developments have been built in Harlem. As more people move to the neighborhood and come to appreciate its historic architecture, the strong sense of community, proximity to parks and ease of transportation, the word has spread,” she reports.

“Buyers at the Adeline frequently have friends who live in the neighborhood and are happy,” Boland continues. “Or they already live here themselves and love it so much they want to buy an apartment instead of renting. Additionally, the restaurant scene in Harlem has become quite dynamic, making it a destination for those wanting to check out the latest hot spots.”

A location for the building’s sales gallery wasn’t secured until mid-February. That meant that from January 1st until the gallery opened, the sales team had to meet buyers in an assortment of conference rooms across the city, selling the building from floor plans and renderings. “We were still able to sell 50 percent of the units during that time because demand has been so strong,” Boland says.

She believes the community as a whole will benefit enormously from the unveiling of The Adeline. “Harlem is getting a great looking new building and lovely new neighbors,” she says. “There will also be a Blink Fitness on the ground level, bringing a new fitness option to the neighborhood.”

Two-, three- and four-bedroom homes remain for sale. They are available from $1.1 million with an anticipated 25-year 421-a tax abatement.