Developers and investors showed attendees at the 2018 ULI Spring Meeting how they are converting vacant or obsolete properties into new uses to spur further investment in the city.

Apative reuse is becoming an increasing popular strategy for developers looking to reposition vacant or obsolete assets for today’s uses while preserving the historic character of a city’s buildings. Attendees at the 2018 ULI Spring Meeting had the chance to tour several recently completed and underway adaptive reuse projects in Detroit, observing how the developments have spurred further investment in the city.

See the slideshow for a closer look at these projects, and learn more about each development below. 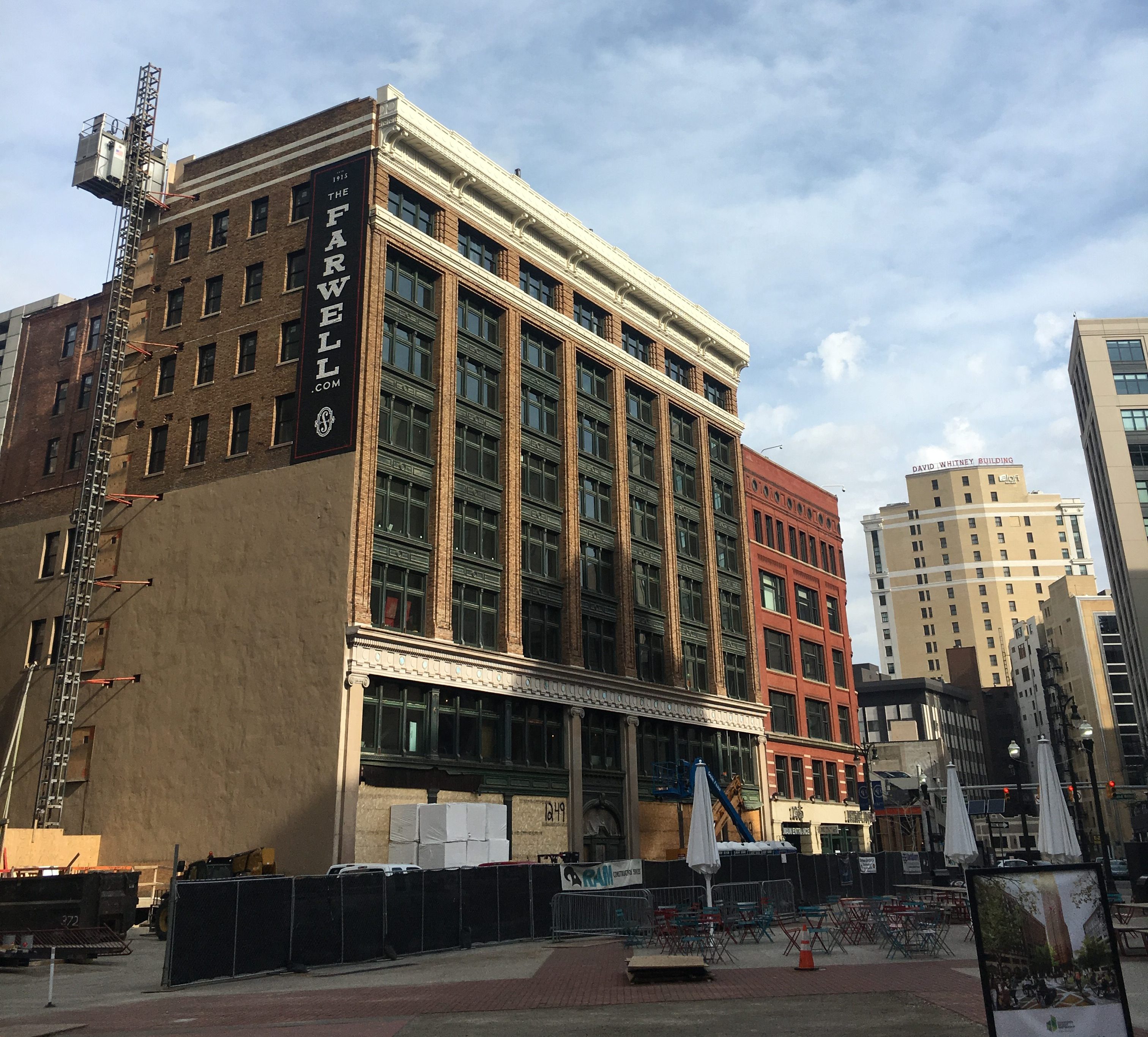 Capitol Park, home of the Michigan’s first capitol building, is currently being redesigned. Local developers are acquiring and renovating surrounding buildings to offer much-needed residential development in the Historic District.

Detroit’s Capitol Park, located in downtown Detroit, has a rich history, serving as Michigan’s first capitol building in the 1830s and as a stop on the Underground Railroad for escaping slaves making their final trek into Canada. The park later became a transit center in the 1950s, before falling into a state of disrepair with many of the surrounding buildings becoming vacant. In recent years, local developers have made it their mission to revitalize the area, with Dan Gilbert’s real estate firm Bedrock purchasing several buildings in the area. The David Stott Building, the last skyscraper to be developed from the Great Depression until the 1950s, fell into disrepair due to negligent owners. Bedrock bought the 38-story Art Deco asset in 2015 and is currently restoring the property, with plans to bring new retailers, office space and residential units. Capitol Park Partnership has also been renovating the buildings surrounding the park, included the 1915-built Farwell Building, which has been vacant since the 1980s and is being renovated into 82 residential apartments, office spaces, retail and restaurant areas, and a rooftop deck.

All the ground-floor retail tenants in the area are paying market rate, which “shows signs of the strength of retail,” noted Sara Pavelko, senior real estate manager of the Detroit Economic Growth Corp., which works to support existing local businesses and bring new investment into Detroit. 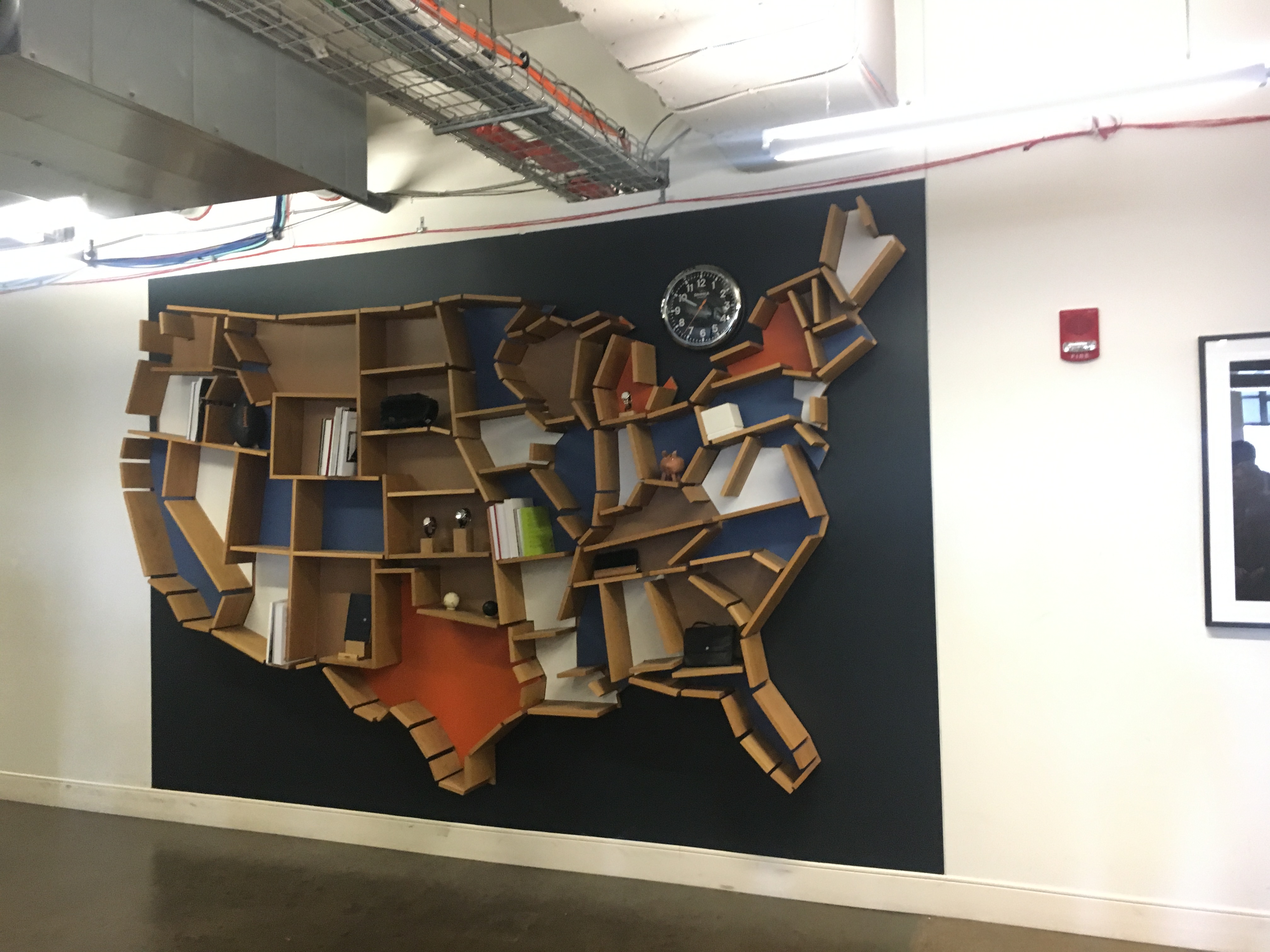 The A. Alfred Taubman Center for Design Education, formerly known as The Argonaut Building, was the home of General Motors’ design operations. General Motors moved its operations in the early 2000s, leaving the building vacant until the College of Creative Studies took ownership and redesigned the building beginning in 2007.

Designed by famed local architect Alfred Kahn in the 1920s, the asset at 85 West Milwaukee Ave., in the New Center area of Detroit, was originally built for General Motor’s real estate arm to serve as its design operations, located across from the GM headquarters (now known as Cadillac Place). GM moved its headquarters to the Renaissance Center in the early 2000s, leaving the building vacant until the firm donated the property to the College of Creative Studies in 2007. The college completed a $145 million renovation the building in 2009 to include an art-focused charter high school, the Henry Ford Academy: School for Creative Studies for sixth through 12th grade, as well as CCS’s undergraduate and graduate programs. In 2012, local lifestyle brand Shinola renovated the fifth floor of the building to serve as its headquarters and watch factory. 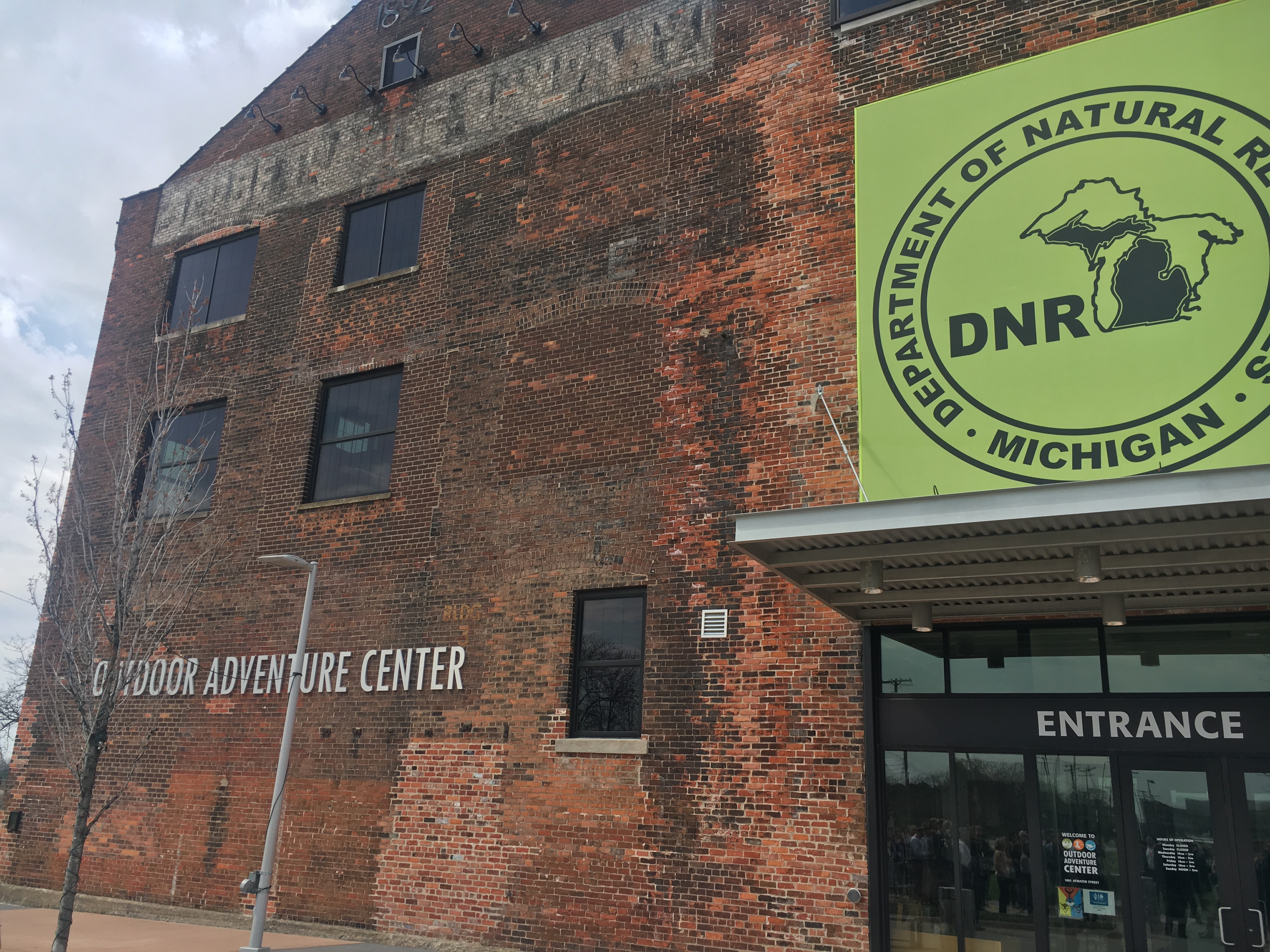 The Michigan Department of Natural Resources’ Outdoor Adventure Center, formerly the Detroit Dry Dock Globe Building, which was built in the late 1800s as a manufacturing building for marine steam engines, is part of the ongoing revitalization of the Detroit East Riverfront District.

As part of the city’s vision to transform the East Riverfront into a 22 million-square-foot, mixed-use development with 30 acres of public space, several developers have taken charge to revitalize vacant and nonviable buildings. Local firm Roxbury Group partnered with the state’s Department of Natural Resources on the adaptive reuse of the former Detroit Dry Dock Globe Building, which was built in the 1800s as a marine steam engine manufacturing site, into the Outdoor Adventure Center (OAC). The asset fell vacant in the late 60s, sending the building into disrepair. Roxbury—which also completed the historic renovation of the David Whitney Building into an Aloft hotel—was able to save about half of the building shell and create a three-story asset with hands-on recreational activities and exhibits.

“The unexpected is what has happened,” said Linda Walter, the OAC director. In addition to the OAC, parks and trails outside are being repaired along 3.5 miles of the waterfront, with plans to extend further west. Another local developer, McCormack Baron Salazar recently opened Orleans Landing, a project years in the making, right next door to the OAC. The community offers 278 market-rate apartments, 56 of which are designated as affordable for those earning up to 80 percent of AMI. 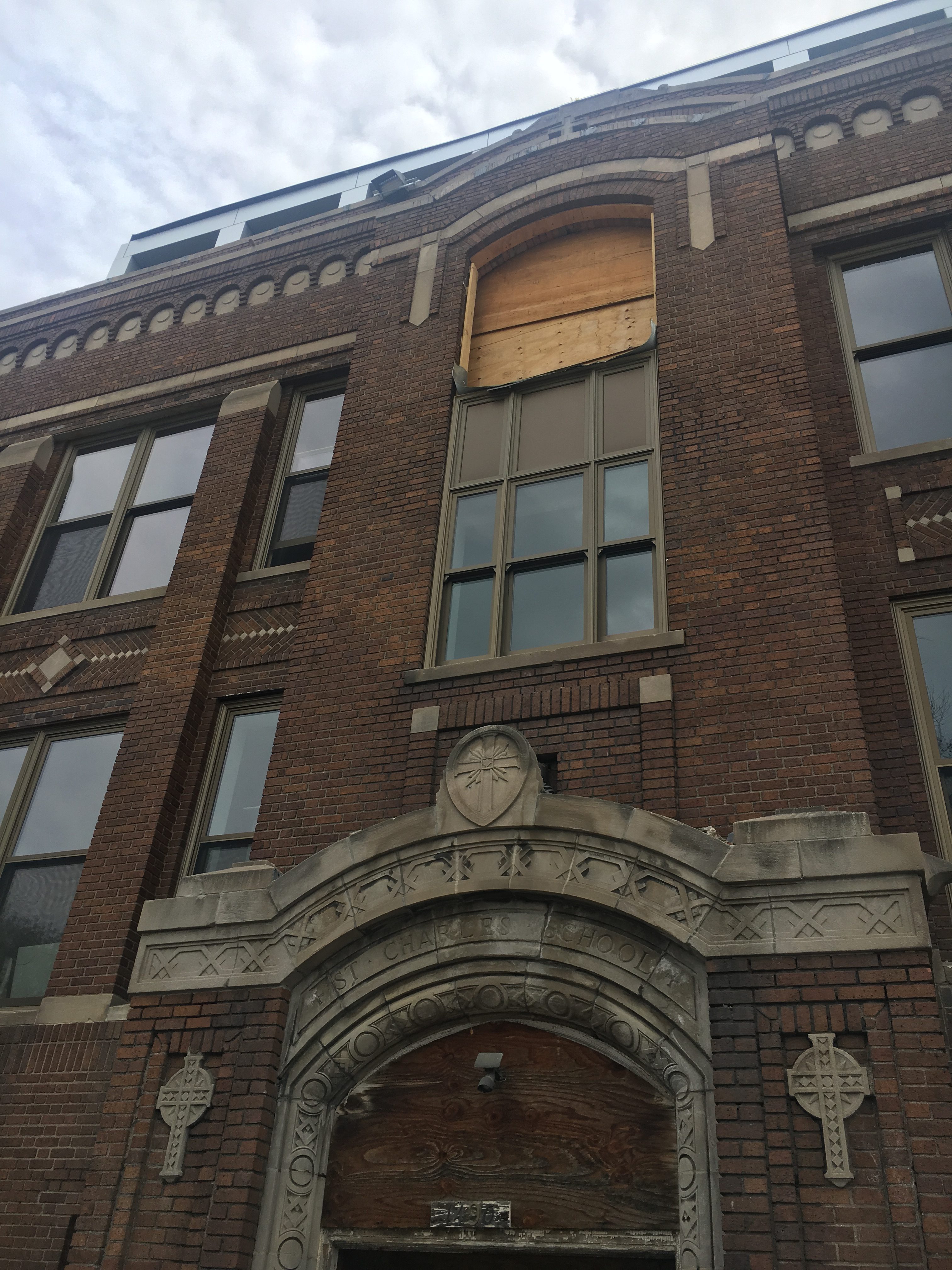 The historic Saint Charles Schools is being repositioned by Banyan Investments into a multifamily community with 25 condos, including five penthouses.

In Islandview, a neighborhood representative of the impact of the housing crisis on the city, with many visibly vacant lots and dilapidated houses, local developer Banyan Investments is showing its confidence in the area’s revival. The firm is transforming the historic Saint Charles School, which was derelict since the late 1970s when the school closed, into a 25-condo community designed by Gensler. The property will also offer a fitness center, first-floor lobby and bike storage, and 40 percent of units are already reserved. But Banyan is not stopping there.

Banyan CEO Aamir Farooqi said the firm will also be developing an eight to 10-unit property next door, as well as several other buildings along Townsend Street.

“We want to give residents confidence that we’re investing in the whole area,” he said.