While developing the luxury project, the firm also invested $20 million in local infrastructure. 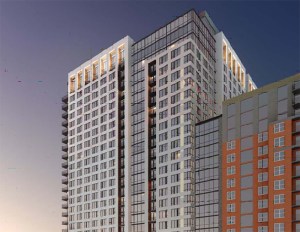 WPC has invested in and developed some $20 million worth of community infrastructure in the Silver Spring area, including road improvements, sewer pipes and water drainage facilities. The firm delivered its first Silver Spring property in 2012, when it opened the Ripley District’s first multifamily tower, Solaire 1150 Ripley. Since then, WPC has also completed Solaire 8250, a 20-story, 338-unit luxury community in the same area. Formerly a declining industrial zone along the Silver Spring railroad, Ripley District now features more than 1,300 apartments with the addition of the Solaire 8200 Dixon.

The asset was developed by WPC in partnership with the Cresset-Diversified QOZ Fund I. The fund, managed by Cresset Real Estate Partners, is the first of three funds the firm has established for real estate projects in qualified Opportunity Zones. There are currently investments in seven assets through the fund.

Solaire 8200 Dixon is the tallest building in Silver Spring. Designed by Design Collective and built by the Clark Construction Co., the asset is located on the former site of Progress Place. The Montgomery County-owned facility, which provides aid to the homeless, has since been relocated. WPC partnered with the county to deliver the new Progress Place, which houses nonprofits such as Shepherd’s Table, Mobile Med and Interfaith Works.

According to Yardi Matrix data, 60 units in the building are affordable. Approximately 30 percent of the total units have been leased.

Designed to achieve LEED Gold certification, the new community has studio, one- and two-bedroom homes. Located at 8200 Dixon Ave., residents are in proximity to the Silver Spring Metro Station. Downtown Washington, D.C., is a 20-minute drive from the property.

The property will also offer Solaire Social, a food and beverage area with nine local dining options, set to open in spring 2023. According to Yardi Matrix data, the building has 15,000 square feet of total ground-floor retail space.