That price reflects a price per unit of $336,735, a record for the Van Nuys area—a neighborhood in the San Fernando Valley region of Los Angeles. 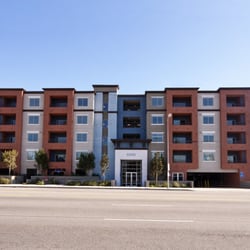 Van Nuys, Calif.—The multifamily property formerly known as IMT on the Boulevard, at 6940 Sepulveda Blvd., in Van Nuys, Calif., has traded for $33 million. That price reflects a price per unit of $336,735, a record for the Van Nuys area—a neighborhood in the San Fernando Valley region of Los Angeles—according to Berkadia, who represented the seller.

One of the attributes of this property is the larger floor plans. Its average unit size is nearly 1,350 square feet, with rents at $1.55 per square-foot. Common amenities include a business center and residential lounge, a fitness center, a recreational room, gated on-grade parking and a large central courtyard.

Managing director Jim Fisher, senior director Mike Smith of the Los Angeles office, and managing director Vince Norris of the Woodland Hills office facilitated the seal for the seller, IMT Capital LLC, which is based in Sherman Oaks, Calif. IMT has been in a divesting mode recently, selling its Thousand Oaks community last month for $67 million, and Westlake Village community for $88.3 million in August.

“Van Nuys is well known in the San Fernando Valley area as a commuter city because it’s a hub to many major surrounding employment centers,” Fisher said. “With a population increase expected in the coming years, IMT on the Boulevard offers an affordable property compared to other multifamily housing in the area.” Van Nuys’ population is currently about 136,000.