While institutional capital isn’t necessarily known for its flexibility and innovation, an environment of accelerating change in business conditions has some companies adjusting their strategies for securing high yields while minimizing risk. 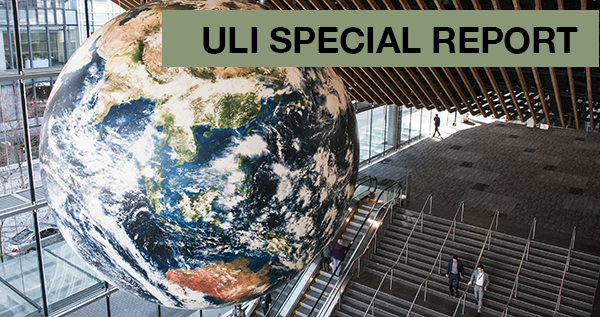 Vancouver—While institutional capital isn’t necessarily known for its flexibility and innovation, an environment of accelerating change in business conditions has some companies adjusting their strategies for securing high yields while minimizing risk. A panel of industry innovators met this Thursday at ULI’s Spring Meeting in Vancouver to discuss their approach for making winning bets in today’s market.

Bruce Batkin, CEO and co-founder of Terra Capital Partners, is no stranger to winning bets. In 2005 his company acquired a controlling interest in its first national office portfolio leased to federal and state agencies. In 2006 Terra Capital Partners doubled down with a second portfolio, becoming one of the largest owners of office properties leased to government agencies. In 2007, Terra sold the 41-property portfolio to a single all-cash buyer. Batkin and his firm sat on that nest egg for two years before returning to the lending market in 2009 in response to credit shortages and lower property values.

With all the talk about a bubble forming in certain sectors and geographies, panel moderator Chris Ludeman, global president of capital markets at CBRE Group Inc., asked Batkin if today’s climate was in anyways reminiscent to that of 2005 and 2006.

“While I am hearing a consensus that things are looking like 2005/2006, I just don’t see that in today’s market yet,” Batkin said. “I feel we are in a lucky position at this point for the next several years—I’d say at least the next four, possibly five, years. This is due to an agreeable Fed, asset values that are substantially below reproduction costs and a highly regulated banking market with a cap on lending for real estate as an asset class.”

Terra Capital Partners is taking advantage of this environment and views multifamily as the most stable asset class. Batkin says that the firm is lending with an 85 percent LTV, sometimes going up to 90 percent LTV if there is an upside in cash flows or previous mismanagement. The firm is not favorable on retail because Batkin admits it hard to understand and predict how the asset class will perform as e-commerce continues to grow.

Charlie Rose, director of Canyon Capital Realty Advisors, chimed in that his firm is looking into retail specifically because a lot of investors are not touching it. While consumer spending remains stagnant on average, Rose pointed out that the economic recovery is a tale of two nations, leaving certain retail areas poised for growth.

Canyon is also beginning to consider selling off in those urban core markets where high valuations are present. The firm was one of the early adopters of urban investment via its Canyon-Johnson Urban Funds which began in 2001. Now that prices are high, Canyon is beginning to look elsewhere.

“We have definitely expanded our definition of urban investing,” Rose said. “There are opportunities in ground-up developments in suburban locations that are transit oriented, walkable neighborhoods. They are doing well for the investors, and doing good for the community and the environment.”

Canyon is not the only company who is switching up their strategy given the current position in the cycle. Mary Hager, a founding parter at Thackeray Partners, has found that investors are more cautious these days than in 2005. This is especially true given the structure of the company’s 10-year equity fund. Thackeray raises money from high net worth individuals and invests in industrial, apartments and retail, though industrial and apartments comprise 70 to 85 percent of the portfolio.

“But right now, I like industrial best out of the three—retail second, multifamily last,” Hager said. “It is just really hard to buy apartments these days. We bought a lot in 2009 and 2010, and developed in 2011 and 2012. We have been selling apartments for the last two years, and are a net seller of apartments. The asset class still performs well, it is just figuring out how to buy it.”

Hager is bullish on industrial due to the broader tenant base, though Thackeray typically avoids buying the big boxes. With more small business formation, there is more a demand for smaller industrial spaces.

One of the more interesting perspectives on the panel was presented by Jillien Helman, CEO and founder of Realty Mogul Co., a rapidly growing real estate crowd funding company that was founded in 2013. The company is now 8,000 investors strong, and sees an average investment of $60,000. The hybrid tech and real estate funding firm is not specifically about democratizing the access to deal flow, but rather seeks to serve  a under represented segment.

According to Helman, Realty Mogul Co. is providing an 8 to 10 percent cash-on-cash return, sometimes lower in core markets with compressed cap rates. The company also employs an ownership structure that is just as innovative as this business’s investment style.

“Finding the right people for staff has been he hardest part about the business,” Helman added. “We now give each employee part of the company, make them owners. It is the best way to make them fanatic about the brand, to make sure that the are here with me at 12 a.m. on Wednesday, or 8 a.m. on a Saturday.

In case this sounded too close to an investment banker’s schedule, Helman pointed out that it is mandatory for employees to eat dinner with their families, and the company operates with unlimited vacation and extremely flexible work hours.