U.S. Apartment Construction on Track to Reach 50-Year High in 2022

New York City is poised to surpass Dallas-Fort Worth in terms of deliveries for the first time since 2018.

As demand for apartments continues to soar amid an ever-competitive housing market, multifamily development in the U.S. is at a historic high this year, according to a recent report by RentCafe.com. No less than 420,000 new rental units are projected to be completed throughout the country before the end of December. The last time apartment completions surpassed the 400,000 units mark was in 1972.

Specifically, New York developers have upped their game and the metro is projected to see the highest number of units this year, surpassing Dallas–Fort Worth metro for the first time since 2018.

Multifamily development activity is finally back to pre-pandemic level as developers have picked up the pace in both 2021 and 2022, despite headwinds related to labor shortages, material costs and availability and supply chain issues, according to Doug Ressler, manager of business intelligence at Yardi Matrix.

In fact, one big reason behind this construction boom is the fact that “people who lived with family or friends during the pandemic formed independent households as employment and savings surged,” Ressler explained. 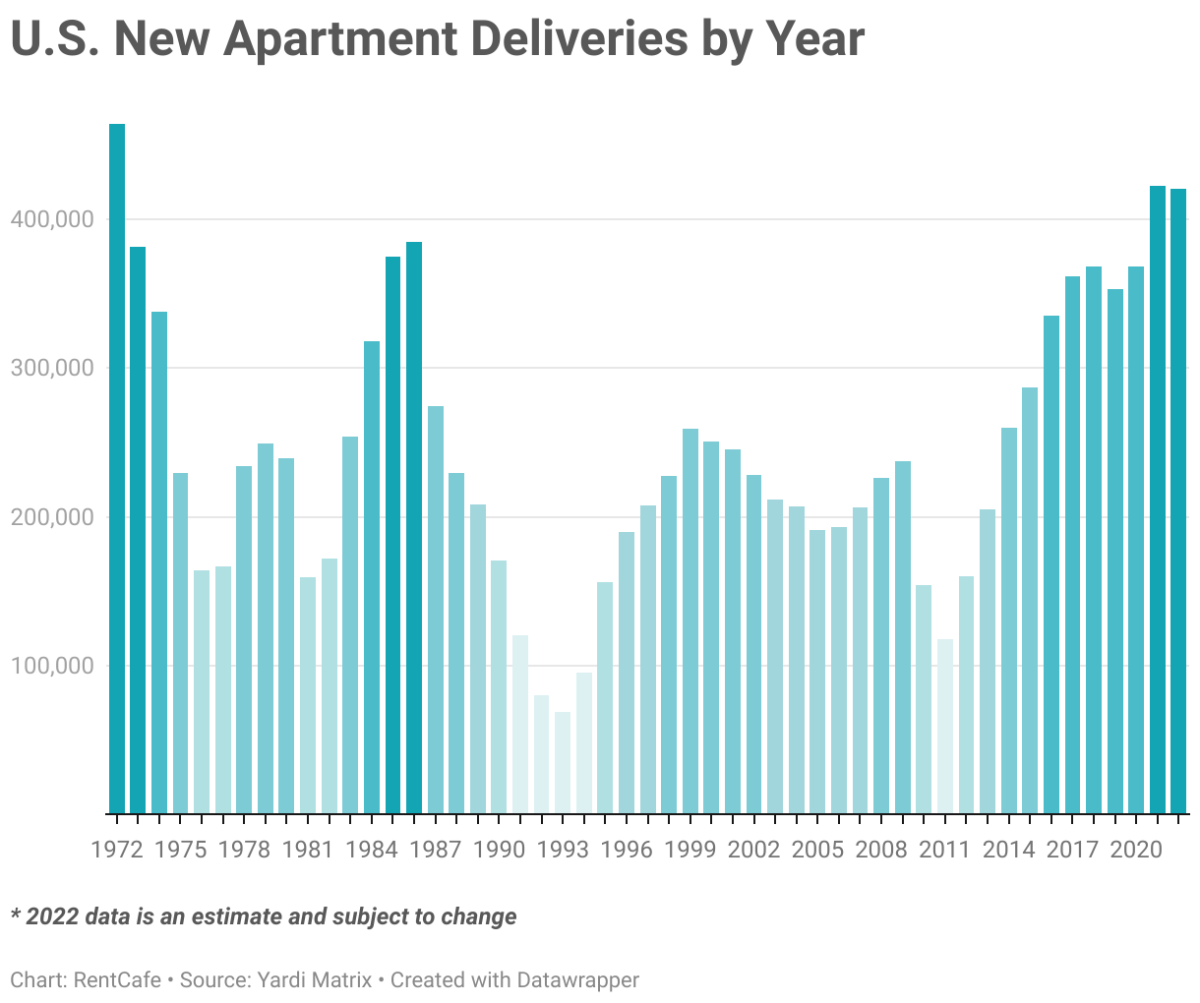 In response to outstanding demand for rental units, half of the top 20 metro areas that made it to RentCafe’s ranking are set to reach their five-year peaks in multifamily deliveries in 2022 compared to their total completions in each of the last five years. These metro areas are New York, N.Y.; Miami; Austin, Texas; Seattle, Wash.; Orlando, Fla.; Nashville, Tenn.; Raleigh, N.C.; Portland, Ore.; and Tampa, Fla.

A record 28,153 new rental units are projected to be delivered before the end of 2022 in New York. That’s almost 50 percent more than total completions throughout the metro in the previous year — a remarkable comeback, considering the lingering effects of the pandemic that have prompted many residents to relocate from the metro since the start of the health crisis. For example, in 2021 alone, New York’s population decreased by 1.6 percent, which translates into roughly 328,000 people.

Meanwhile, construction activity in the Dallas-Fort Worth is slowing down after a four-year streak, despite the fact that the metro area has seen some of the largest population gains in the country. This year, 23,571 new apartments are set to be completed throughout the metro, a 10 percent decrease compared to 2021 levels. 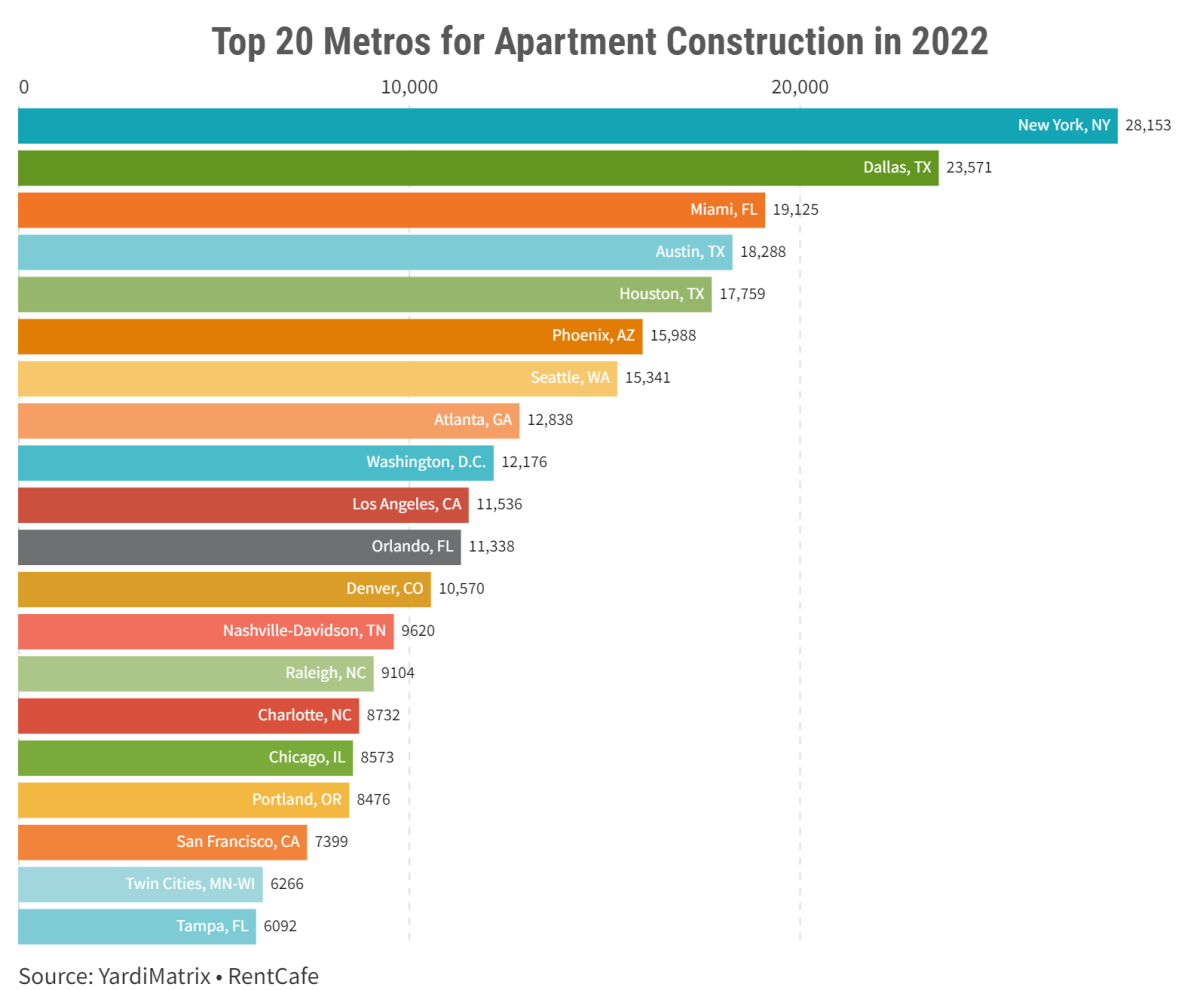 Miami metro, the most competitive rental market in the U.S. this year, climbed an impressive six positions in RentCafe’s ranking, completing the podium this year. No less than 19,125 rental units are expected to come online in the metro before the end of 2022, which accounts for a 5.8% uptick in new deliveries year-over-year.

Two Texas metros, Austin and Houston, secured the fourth and fifth spots, with 18,288 units and 17,759 units, respectively, scheduled to be completed in 2022. Next comes Arizona’s torchbearer of apartment deliveries, Phoenix, with 15,988 new rental apartments expected to come online this year, followed closely by Washington’s magnet for new residents, Seattle metro, with 15,341 units.

Two Texas cities saw the most multifamily completions halfway into 2022

Furthermore, on a city-level comparison, Texas dominates RentCafe’s ranking, with four cities present in the top 20. Houston is the undisputed leader in terms of completions, with 4,746 new units delivered in the first half of the year. Next up is Austin, where developers added 4,236 new apartments between January and June. Meanwhile, San Antonio and Dallas saw the completion of 2,394 units and 1,507 units, respectively, securing the sixth and 18th spots.