The residences will sit atop a hotel, giving residents access to amenities and services. 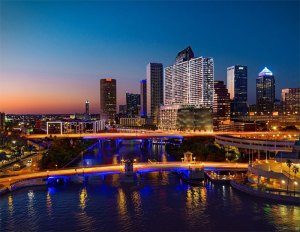 Two Roads Development has broken ground on a luxury condominium project that’s being built atop a hotel. Pendry Residences Tampa, is being developed by Two Roads and Pendry Hotels & Resorts and is expected to debut sometime in 2024. The partnership tapped Arquitectonica as the project’s architect.

The 38-story Pendry Residences Tampa will offer 207 units in one-, two- and three-bedroom floorplans ranging from 1,621 to 4,208 square feet. The developers are also planning for penthouse residences on the top floors of the luxury condo, which is being built above a 220-key hotel. The units will be built with floor-to-ceiling windows, private terraces, soaking tubs, double vanities and marble kitchen islands. Residents will have access to the building’s amenities including a rooftop pool, sundeck, residential lounge, private lounges, wellness facilities, as well as the hotel’s services, like a dedicated residential staff, asset preservation, property management and personalized experiences.

According to Pendry, the project has already secured some contracts for its condos across a variety of floor levels and styles. Pendry also said in a press release that the contracts total more than $160 million in value already.

Flourishing in the Florida development sector

Elsewhere in Florida, the developer is also working on Forté, a 41-unit luxury community located in West Palm Beach, Fla., which is currently under construction. The developer also completed construction at the 391-unit Biscayne Beach and the 100-unit Elysee, both of which are located in Miami’s Edgewater district. While Two Roads Development also recently started sales at its Edition Residences community that’s also in Edgewater, the developer is planning to announce another project next month.