Fairground Flats is scheduled for delivery in 2024. 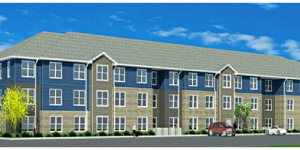 TWG Development has broken ground on Fairground Flats, a 216-unit affordable housing community in Oklahoma City. Construction is slated for completion in 2024.

The $47 million project is being developed with the support of the Oklahoma Housing Finance Agency, Citibank, Bank of Oklahoma, Raymond James and the Oklahoma City Economic Development.

Fairground Flats is designated for residents earning 60 percent of the area median income or less. Plans call for six buildings with one-, two- and three-bedroom apartments. Common-area amenities will include a swimming pool, a fitness center, a clubhouse, a playground and computer workstations with internet access. The property will have energy-efficient features, such as Energy Star appliances and LED lighting.

Fairground Flats will be located at 2820 General Pershing Blvd., on a 8.5-acre site near the conjunction of Interstate 44 and Interstate 40. There is a variety of dining options and retail centers in the area. University of Oklahoma Medical Center is within 4.4 miles from the site.

Fairground Flats marks TWG’s second project in Oklahoma. Joanna McSpadden, the Economic Development Program Manager of Oklahoma City, said in prepared remarks that projects like Fairground Flats will help address the affordable housing crisis, which will be among the top policy challenges for the multifamily industry again this year.

Increased construction and labor costs are putting additional pressure on affordable housing developments. However, the installment of the bipartisan Affordable Housing Credit Improvement Act could reduce barriers to the development of new housing.