Top 10 Markets for Transaction Activity in 2020

During a year when sales volume dropped by almost one third, these metros outperformed the rest of the country, according to Yardi Matrix data.

Last year proved challenging for the multifamily sector, with year-over-year rent growth declining in many markets. The COVID-19 health crisis has seen renters in more dense and expensive gateway markets relocating to suburban areas and smaller U.S. cities, in search of affordable alternatives.

The majority of investment activity has remained focused on established urban multifamily markets, but that too has been affected. The number and the amount of deals changed, with most assets trading for less than $100 million. As a result, sales volume dropped 32.1 percent in 2020 from the previous year, according to Yardi Matrix. The 10 metros on this list accounted for almost half of last year’s transaction volume, at $39.1 billion.

As a result of the coronavirus outbreak, 2020 was, at least in part, challenging for the energy sector, on which Houston’s economy is reliant. And that had an impact on the employment market, with some 185,000 positions lost in the 12 months ending in November. Total multifamily sales volume dropped 47.8 percent in 2020 compared to the previous year to $2.3 billion. In separate transactions, Berkshire Residential Investments paid $141 million for two communities in Conroe, Texas, including the metro’s second-largest deal of 2020. Meanwhile, Knightvest Capital purchased the 431-unit San Simeon from AMLI Residential for $97.7 million, in Houston’s biggest multifamily transaction of last year.

Due to a heavily hit employment market in the wake of the health crisis, in April, Miami’s unemployment rate jumped to a record-high 13.4 percent, the highest level in more than a decade. But the metro’s business-friendly climate and solid pre-pandemic demographic trends have kept multifamily investment shielded from the harsher effects of the crisis and resulting economic volatility. Last year, investment volume totaled $2.3 billion, down 16.1 percent from the previous year. Northwestern Mutual paid Mill Creek Residential Trust $180 million for the 555-unit Emera Port Royale, in the metro’s largest transaction last year. The sale was part of a 1031 tax-deferred exchange, according to Yardi Matrix.

As a result of its office market’s outstanding growth over the past couple of years, Austin’s multifamily sector has also seen significant upticks in population, rent and occupancy growth in pre-pandemic times. Last year, despite the global health crisis that heavily impacted the country, the metro continued to attract multifamily investors, thanks to Texas’ business-friendly climate and Austin’s high-paying jobs. In total, transaction volume reached $2.4 billion, up 12.6 percent from the previous year and the highest level in more than a decade. In separate transactions, Eaton Vance Investment Managers purchased three communities totaling 1,075 units for a combined $158 million. Meanwhile, the single-largest deal closed in Austin last year was Castle Lanterra Properties’ $129 million acquisition of Residences at the Triangle from Dinerstein Cos.

While at the outbreak of the COVID-19 pandemic it was unclear how Tampa’s economic development would be impacted, the picture is a lot clearer now. Despite the initial shockwave that saw the jobless rate go up to a record 13.2 percent in April, by November it declined to 5.7 percent, 70 basis points below the national average. In the 12 months ending in November, the metro lost almost 70,000 positions, with the leisure and hospitality sector down 16.5 percent year-over-year, or 31,000 jobs. In terms of transaction activity, however, the contraction was less severe. In 2020, investors closed deals totaling $2.5 billion, down 34.2 percent from the $3.8 billion of the previous year. Bridge Investment Group closed two deals last year, totaling $184 million, acquiring three communities encompassing 1,138 units. One of the deals was a $101.3 million acquisition of two Florida assets from Forum Real Estate Group.

In the 12 months ending in November, the metro’s employment market contracted by 67,700 positions, with most sectors bleeding jobs. Overall, the unemployment rate—which spiked to 13.2 percent in May—stood at 5.9 percent in November, 50 basis points below the national average. In terms of multifamily transaction activity, Charlotte has been experiencing an upward trend for the past three years, with sales volumes consistently surpassing $2.5 billion each year. And thanks to its appeal, as well as a robust employment market prior to the pandemic, transaction volume in 2020 only declined by 3.4 percent from 2019, to $3 billion. In a deal with Preferred Apartment Communities, TPG Real Estate purchased RUSH, a 332-unit student housing community, as part of a multi-state, $479 million deal, with the seller exiting the student housing market. 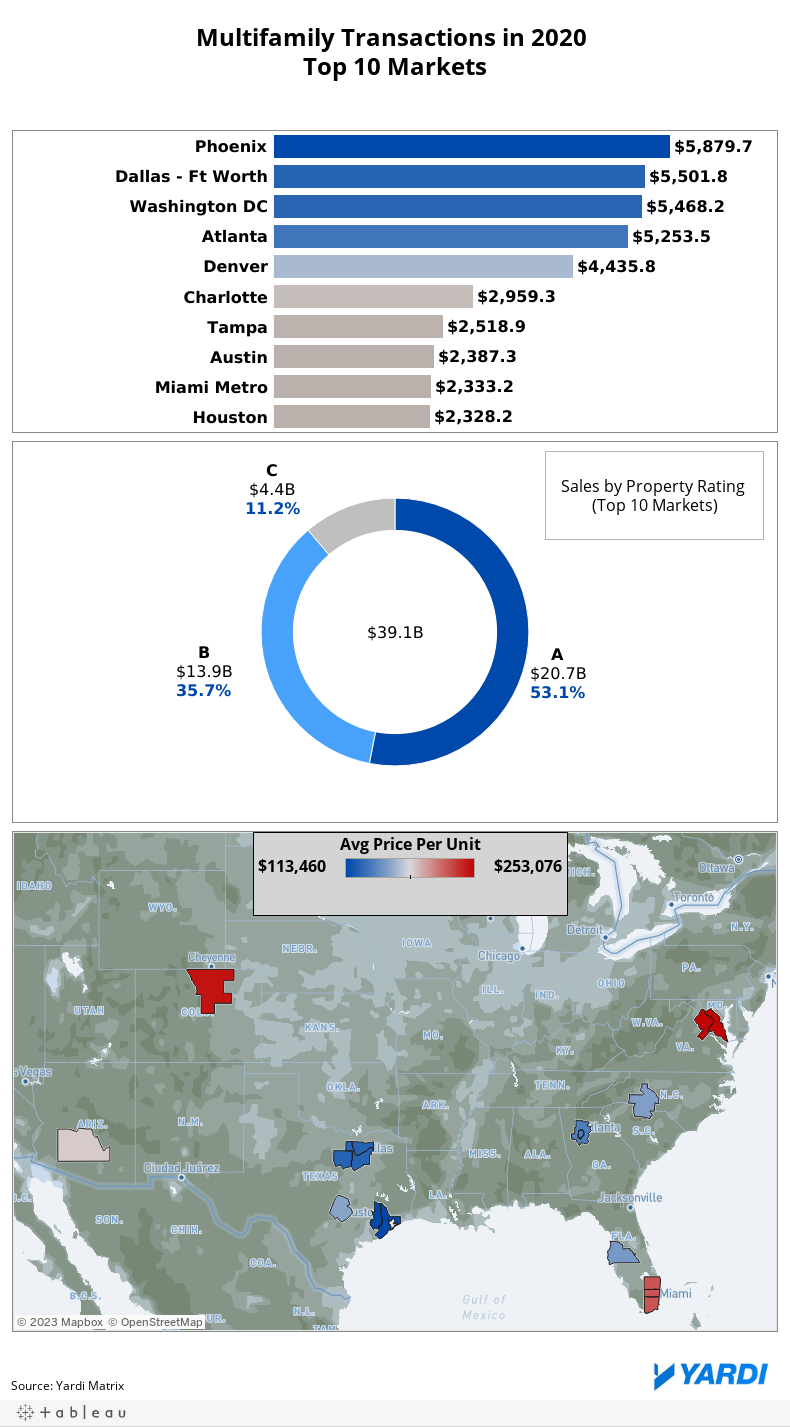 In November, Denver had a jobless rate on par with the national average, at 6.4 percent, after reaching a record high of 12.3 percent in April. On the back of a development boom that has characterized Denver’s multifamily market for the past couple of years, investment interest saw a significant uptick starting with 2015. And while the past two years have not come close to 2016’s $7 billion in closed deals, they remained robust even in the face of a global health crisis and economic volatility. Last year, the metro’s sales volume dropped 15.9 percent from 2019 to $4.4 billion, while remaining almost on par with 2018’s $4.6 billion. Oak Coast Properties had a busy 2020, selling the 959-unit Pembrooke on the Green to Bridge Investment Group for $163 million in the largest deal of the year. In addition, the company also acquired three communities totaling 1,378 units in separate deals with JRK Property Holdings, CBRE Global Investors and Griffis/Blessing for a combined $321 million.

At the outbreak of the pandemic, Atlanta’s employment market had taken a serious hit, with its unemployment rate reaching a record 12.7 percent in April. By November, it declined to 5.6 percent, 80 basis points below the national average. In the 12 months ending in November, the metro lost 84,100 positions, with increases only in the construction and trade and transportation sectors. As for the sales volume, it also saw a 32.9 percent nosedive in 2020 compared to the previous year, to $5.3 billion. LivCor expanded its portfolio with the purchase of three Phoenix communities totaling 1,474 units, paying a combined total of $364.8 million. The transactions included the largest multifamily deal in the metro—the $179 million acquisition of the 709-unit Notting Hill from JRK Property Holdings.

For the better part of last year, Washington, D.C., had shown great performance in the face of the pandemic. The employment market contracted by 6.1 percent in the 12 months ending in November, losing more than 180,000 positions. Transaction volume totaled $5.3 billion in 2020, the lowest level over the past two years and a 21 percent drop from 2019’s $6.6 billion. In the top two submarkets for transaction activity, Fairlington-Seminary Hill-West Potomac and Dale City-Lorton-Woodbridge, investors closed eight deals, including the metro’s largest transaction of the year, CIM Group’s $506 million acquisition of Southern Towers from Snell Properties. The Alexandria, Va., asset encompasses five buildings that came online between 1960 and 1964.

As a result of its consistent efforts to diversify its economy, Dallas has seen significant demographic growth and the expansion of several office-using employment sectors, which were more resilient in the face of economic uncertainty. That strategy paid off in 2020, as both financial activities and professional and business services jobs were up in the 12 months ending in November by at least 1.9 percent and as much as 4.4 percent. Meanwhile, the metro’s overall employment market contracted by 60,600 positions. Transaction activity was also down last year, but by only 12.5 percent to $5.5 billion.

Despite enjoying years of solid population, employment and rent growth, Phoenix was not immune to the effects of the health crisis. The metro lost more than 50,000 jobs in the 12 months ending in November, with contractions ranging from 0.6 percent in other services and 14.5 percent for the leisure and hospitality sector. The multifamily investment activity also took a hit, as was the case almost across the country. Transaction volume dropped 19.3 percent last year from 2019 to $5.9 billion. Cortland closed three deals totaling $262.9 million, including the largest individual transaction in the metro—the $117 million acquisition from StreetLights Residential of a 253-unit community rebranded as Cortland Biltmore. In total, the company expanded its Phoenix footprint by 860 apartments.