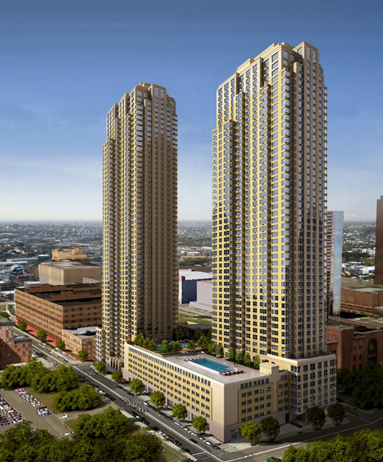 Jersey City, N.J.—More details have emerged on what will be the tallest apartment building in Jersey City. CIT Real Estate Finance has announced that it served as lead arranger and administrative agent in a $140 million senior secured loan to Kushner Cos. and KABR Group that will be used to finance the development of Trump Bay Street, the second tower of Trump Plaza in Jersey City. The 50-story rental tower broke ground this April. Proceeds from the loan will also be used to acquire a parking garage and 7,200 square feet of retail space.

“We’re pleased to complete our fourth transaction with Kushner Companies to create a great mixed-use property that will benefit from its proximity to New York City and surrounding communities,” says Matt Galligan, president of CIT Real Estate Finance. “Our ability to put our commercial real estate expertise to work for Kushner and the KABR Group will enable them to develop the tallest rental apartment building in Jersey City offering unobstructed views of Manhattan, the Statue of Liberty and the George Washington Bridge.”

The total cost of the development for the 447-unit tower is estimated at $193.5 million.

“Jersey City is a growing, vibrant area that offers residents a high quality of life and easy access to New York City,” says Jared Kusher, president and CEO of the Kushner Companies, and son-in-law of Donald Trump.

New York—Madison Realty Capital has closed $33 million in first mortgage financing for 45 Park Place, a luxury condo tower currently being built by Soho Properties. The developer filed plans with the NYC Department of Buildings in May, and plans to start construction in 2015.

Designed by architect Michel Abboud of SOMA Architects, with Ismael Leyva Architects, 45 Park Place is a glass and steel tower that will be 665 feet, offering panoramic views from its location at the southern edge of the Tribeca Historic District. The tower will be neighbor to a museum and public green space designed by world-renowned architect Jean Nouvel. Construction is expected to begin in 2015, with delivery of the tower in 2017. Tishman Construction will serve as construction manager.

The commercial mortgage transaction was structured with a 10-year term and 30-year amortization schedule. NorthMarq arranged financing for the borrower through its relationship with a national bank.

“We were pleased we could accommodate the borrower requirements for sourcing a competitive construction/permanent loan for a new Class A multifamily project in an underserved market,” says Riekstins.