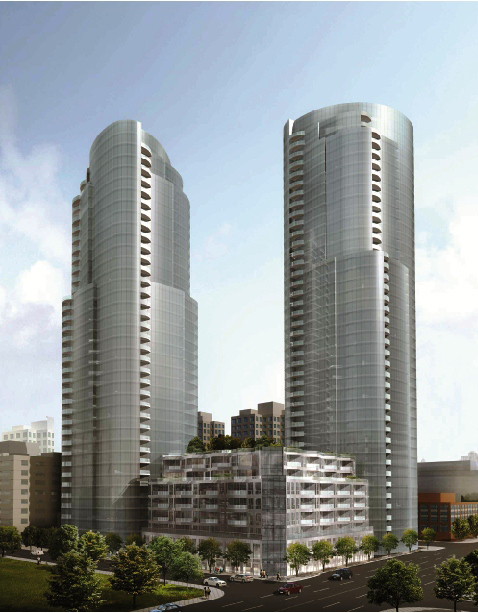 “We are very pleased to have assisted Tishman in securing financing for this landmark project,” says Mike Tepedino, senior managing director at HFF. “Investors were extremely responsive to the strong performance of Tishman’s nearby condominium development, The Infinity, as well as the excellent location within the much sought-after Rincon Hill neighborhood.”

Tepedino worked with a team consisting of Bruce Ganong, also a senior managing director, as well as Michael Gigliotti, Jennifer Keller and Brandon Roth. Financing was secured through a single source lender in Cornerstone Real Estate Advisers on behalf of an institutional investor. 201 Folsom is due for completion in January 2016. The first podium should be open for business in 2015.

The two towers will be 42- and 37-stories tall. The project also includes 10,963-square-feet of ground floor retail and an amenity package consisting of valet parking, a private health club and spa, swimming pool, private dining, rooftop community space and a screening room.

Los Angeles—In other news coming from the The Golden State, BRE Properties Inc. has announced that it completed the sale of Summerwind Townhomes, a 200-unit apartment community located in Los Angeles. The transaction price was $46.8 million. That 1987-built property was fetching $1,889 in monthly revenue per occupied home, and a 2013 NOI of $2.85 million.

BRE Properties also announced that it has sold its 15 percent interest in Arcadia Cove, a 432-unit property in Phoenix. Net proceeds from that sale were $6 million. The sale of both communities resulted in a combined net gain of approximately $22 million.

Financing was based on a 15-year term and a 25-year amortization schedule. NorthMarq arranged this financing for the borrower, a national multifamily investor, through its relationship with a correspondent life company lender.

Total loan proceeds were disbursed at closing even though the subject property was still in the rehab and lease-up phase.

“The sponsor purchased the defaulted note on the subject property and began an extensive rehab of the structure—exterior and interior,” Hernandez says. “The opportunistic purchase and extensive rehab created enough value to compel the lender to fund the entire loan prior to the completion of the work.”