May 2017 marked the third consecutive month of rent growth deceleration and the 13th year-over-year slowdown, although development remains controlled. 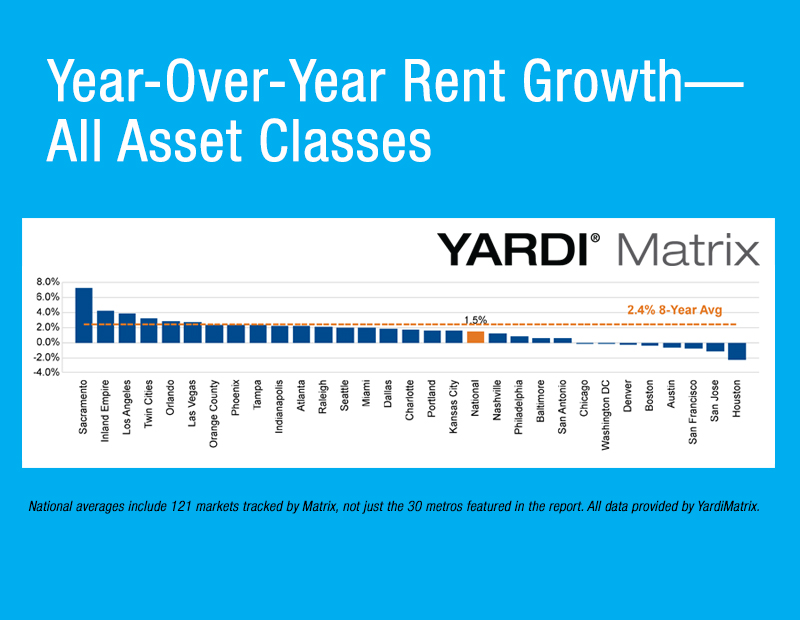 While multifamily rents increased during the month of May, the rate of growth decelerated for the third month in a row, Yardi Matrix reported in its monthly rent survey. Average U.S. rents increased $4 to $1,316, the survey of 121 markets revealed, while on a year-over-year basis, rents increased 1.5 percent, a 40-basis-point decrease from April. May’s growth rate is 90 points less than March’s was and a considerable deceleration from the 5.3 percent rate seen during the same time last year.

May’s growth figures represent the 13th straight month that year-over-year growth has decreased since the peak of 5.4 percent in April 2016. The last time year-over-year numbers were this low was in April 2011. According to the report, “Driving the rent deceleration is the increase in supply nationally combined with issues that vary by market, such as slowing demand or affordability.“

Yardi Matrix’s analysts wrote that 36,000 units are expected to come on the market in 2017 in addition to the 281,000 new units introduced in 2016. The discrepancy between higher-end Lifestyle units and workforce-driven Renter-by-Necessity units is a sign that new supply is not meeting the demand of most renters. On a year-over-year basis, Lifestyle rents have not increased or decreased, while growth for Renter-by-Necessity has increased by a moderate 2.6 percent.

While the usual suspects—Sacramento, the Inland Empire and Los Angeles—continue to be unphased by the deceleration with growth rates of 7.3 percent, 4.2 percent and 3.9 percent respectively, rent increases are held back by new construction in other high-growth metros. Such areas include Orlando, with a growth rate of 2.8 percent; Phoenix, at 2.3 percent; Atlanta, with 2.2 percent; and Dallas at 1.8 percent. The report states that demand remains healthy in these areas, but new supply is hindering the possibility for rent growth.

The report called the slowdown “not unexpected,” as Yardi Matrix has continually predicted  moderation as a product of recent oversized increases. When it comes to predicting how low growth will stoop and how long it will remain there, the report posits that it will depend on how long oversupply remains a concern and how well the economy will perform. “We anticipate that supply will peak this year,” wrote the analysts, “although it will remain relatively robust in 2018 and 2019.”