The Complicated SFR and BTR Markets

Panelists at NAREE discuss the highs and lows of this growing asset class. 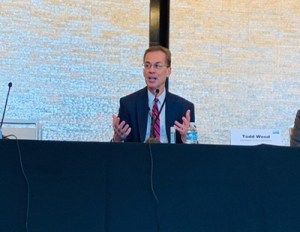 The single-family build-to-rent sector has been described during a panel at the National Association of Real Estate Editors conference in Miami as a growth business that is only just now findings its legs.

When Richard Ross of Quinn Residences founded his company a month prior to the start of the pandemic, his goal was to raise $250 million. The company recently closed out its capital raise at a whopping $900 million.

“That’s indicative of the strength of the market,” said Ross, who predicted that the 29,000-a year run-rate of new BTR houses over the last decade is likely to double over the next five years.

Added Todd LaRue of RCLCO: “There is huge universe of demand for these alternative rental units.”

Todd Wood of Christopher Todd Communities said his company’s on the verge of a major expansion. “We will be in every single region,” he told a session on the BTR boom. “If we are not there yet, we will be.”

But in an earlier session on the future of the post-COVID suburb, panelist Alex Kamkar of Bold Fox Development shared his negative thoughts on the BTR concept, essentially calling it perhaps the worst thing to hit the housing market.

“Housing is not a commodity, but the investment guys think it is,” said Kamkar, whose firm develops master-planned communities. “Houses are being taken offline to the benefit of Wall Street,” but to the determent of local home buyers.

The developer explained that some BTR companies are buying a large number of lots—maybe 300 at a time— and then hiring local builders to put up houses. In doing so, he said, they are not only adding to the scarcity of building sites but also taking builders away from producing market-rate, for-sale houses.

According to the National Association of Home Builders, the availability of building sites nationwide is at a multi-decade low. And housing blogger Bill McBride of Calculated Risk recently reported that a record 109,000 houses that have been permitted have yet to be started, almost double the normal level.

“I know of at least three instances where builders have walked away from building single-family houses in order to build rental houses,” said Kamkar, who also is a city councilman in Pearland, Texas, where he has fought to block the development of SFR communities. “That’s artificially pressing down the market.”

The result: “We’re not building enough houses for Joe Six-Pack to own,” he said.

Adam Ducker of RCLCO agreed with the Texas developer, but only to a degree. “You are right,” Ducker said, “but hopefully this will only be temporary.” Architect Mark Meyer of TBG Partners was “a little more optimistic.”

Eventually, the market will work itself out, Kamkar conceded, “but a lot of people are going to get hurt. There’s only so many A-list renters and rents are never going to come down.”

Meyer suggested that BTR communities will eventually be traded among investors in the way apartment properties were swapped in the 1990s, and as they are dealt from one buyer to the other, they will be upgraded.

But Kamkar warned that there are only so many top-notch investors to go around. “The Blackstone Group is the creme-de-la-creme,” he told Multi-Housing News after the session, “but the next buyer won’t be Blackstone. “This thing is going to go broke eventually.” Blackstone owns Invitation Homes, one of the nation’s largest BTR companies.

Meanwhile, at the session dedicated to single-family rentals, Wood, which is partnering with national home builder Taylor Morrison to build its “safe, highly amenitized, luxury” product, said that “upon stabilization,” Taylor Morrison plans to sell its projects to investors. But the Christopher Todd brand will remain.

He added that new owners must meet “our highest level of standards.” If they fail to follow the firm’s criteria, he added, the company will pull its name off the front door.

Wood said 65 percent of Todd Communities’ residents are under age 35. Many are “highly professional,” work out of their homes and “want everything a professionally managed community has to offer…If they need to change a lightbulb, we’ll come in a change it,” he said.

He also said half his residents eventually want to own their homes, “and we promote that…But the reality is with what they are faced with, they want to rent now until they are ready to jump into home ownership.”

Ross described three profiles that seem to fit the typical BTR occupant—they can’t afford a down payment for a house or have credit issues, they want to move more frequently then ownership allows or they want to live closer to their grandchildren but don’t want to buy. “We’re providing them with what is (effectively) a starter home,” he said.

Wood also said the learning curve in new locations is huge as some local officials don’t understand the product. “They just don’t know where it belongs,” he said.

Phoenix, where perhaps 30 percent of all multifamily housing built today is BTR, has solved that problem by creating an entirely new building code for the product, Wood pointed out. “We embrace coming up with new codes.”