The conversation about home sharing is far from over for multifamily.

Huntington Beach, Calif.—If you thought the final answer to Airbnb’s efforts to play nice with multifamily was “never going to happen, don’t ask again,” a panel at Tuesday’s Apartment Internet Marketing Conference was an eye-opener.

JaJa Jackson, head of multifamily partnerships for the popular home-sharing website, made this bold prediction: in the next 24-36 months, he speculated, 50 percent of multifamily housing providers will decide how to allow regulated home-sharing in their apartment communities.

Airbnb is currently piloting partnerships with multifamily providers in certain urban markets, in an effort to see how owners, residents, short-term subletters and other vested parties can harmonize.

Driving the continued conversation around the sharing economy is the realization of many property owners that they could have increased opportunities to bring in revenue from Airbnb-like activity, whether it’s from renting temporarily vacant units or allowing renters to list their units while they travel.

“Many of the brands we spoke to are very focused on developing community at their properties, and they’re also focused on millennials,” Jackson said. “They’re thinking a lot about long-term relationships, and building a feeling that their community is a place where everyone can thrive.”

For property owners, hurdles about security and accountability may remain. But the conversation is far from over. Other sharing economy opportunities, like renting out parking spaces short term, are also on the table.

“The No. 1 way you can champion revenue growth opportunities is to understand what’s wrong with them and then figure out how to address those concerns of the management team,” Jackson said. 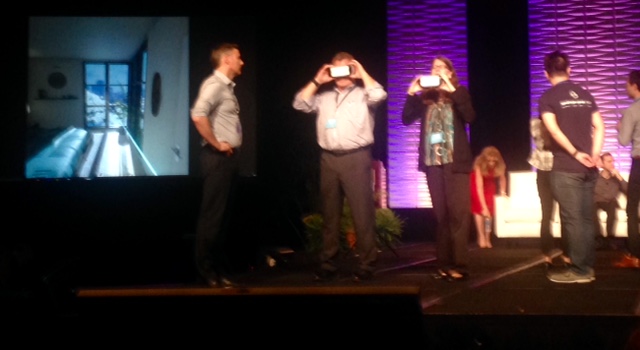 A popular session presented on Tuesday morning included the presentation of new technology that literally enhances reality. Matt Bell, co-founder and chief strategy officer of Matterport, showed off his company’s technology, which creates 3-D models of apartments or homes after photographing them with a special camera.

“3-D is uniquely powerful to be able to communicate a sense of place online,” said Bell, adding that it improves viewer engagement by three to six times. “We find that this accelerates the decision-making process.”

For communities still in development, viewing 3-D models with virtual reality goggles can put a prospective buyer inside their new home or apartment, even if ground hasn’t been broken yet.

The Shipyard San Francisco, a master-planned mixed use community currently under construction, used it as once piece of a major marketing blitz for 12,000 homes. Powerful videos, cohesive branding, live events and a distinct sense of lifestyle are all part of the campaign.

“This is just one tool that we’re using, but it’s one that makes everyone go ‘Wow,'” said Sheryl McKibben, chief marketing officer for Lennar Urban, SF Shipyard’s developer. “We were able to sell units without it, but now that we have it, it makes the process that much quicker.”

As the AIM audience watched, volunteers donned Oculus Rift goggles to take a “tour” of a prospective home. On a jumbo screen, the living areas of the residence felt touchable, down to views of the ocean out the windows and clothes hanging in the master bedroom closet.

Self Storage Poised for Growth in 2022

Self Storage Poised for Growth in 2022