By Adriana Marinescu
May 8, 2020
Affordable HousingChicagoDevelopmentMidwestNews

Sarah’s Circle financed the 36,000-square-foot development with a $14 million donation from a national foundation. 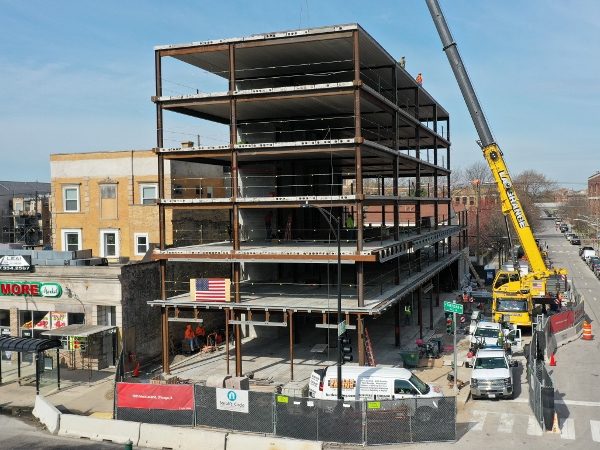 Skender has topped out on Sarah’s Circle’s new 36,000-square-foot supportive housing facility in Chicago. According to Block Club Chicago, work started in 2019 on the $17.5 million project, with construction slated to complete in about 18 months. The development team also includes Brinshore Development and design firm Perkins+Will. Brinshore is also one of the developers of a 164-unit mixed-income community in the city’s Bronzeville neighborhood.

Non-profit Sarah’s Circle financed the project with a $14 million donation from a national foundation, while The City of Chicago’s Department of Community and Economic Development contributed with $3.5 million, according to Crain’s Chicago Business. The organization caters to women who are homeless or in need of a safe space by providing food, clothing, housing and clinical services for victims of domestic violence and trauma.

Located 4654 N. Sheridan Road, the shelter rises on the former site of the Leland and Sheridan Building, a property dating from 1914. The new development will incorporate many of the old building’s original materials. The six-story building will feature a basement, 38 studio apartments for long-term housing and emergency overnight space for 50 non-permanent beds. Amenities are to include a large community room, computer lab, on-site laundry, kitchen and dining hall.

The property is roughly 8 miles north of downtown Chicago in the Uptown neighborhood, two blocks from the Sarah’s Circle Daytime Supportive Services Headquarters. The location is easily accessible through public transportation, being within walking distance of several bus stops and two metro stations.