Rising 31 stories, the development will include more than 6,000 square feet of ground-floor retail. 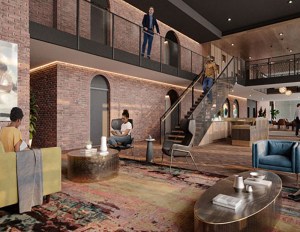 Skanska will begin construction on Kaye, a 31-story multifamily tower, in Seattle this winter. The development will feature 324 units across 260,619 square feet. Ten of the apartments will include more than three bedrooms.

The site, which is approximately half an acre, was originally acquired by Skanska in 2017, according to Yardi Matrix data. Located on the 2200 Block of Belltown, Kaye will include 6,100 square feet of ground-floor retail and neighborhood spaces.

Skanska USA Building will oversee construction and act as the general contractor for Kaye. Several architects will work on the project, including VIA as design architect and architect of record, Grzywinski + Pons of New York as the consulting design architect, Strata Architects for the ground floor and GGLO as the landscape architect. Ankrom Moisan Architects will head up interior design, while KPFF is the structural and civil engineer. Mechanical, engineering and plumbing for Kaye will be managed by Rushing.

Previously occupied by Studio X and Bad Animals, the new development will incorporate the musical history of the location. The ground-floor living room will feature a band rehearsal space as well as retail, a café and a working area.

Situated between Blanchard and Bell streets, residents will be in proximity to dining and entertainment options, the Bell Street Park and downtown employers. Belltown, according to Statistical Atlas, is the most densely populated neighborhood in Seattle, known for its high quality of living and variety of art galleries, restaurants, nightclubs and parks. Seattle overall is experiencing growth across both rents and occupancy rates this year as more people flock to the area.

The project is targeting LEED Gold, Salmon-Safe, Fitwel and WiredScore Gold certifications. O’Brien 360 is acting as sustainability consultant for the development. Kaye is anticipated to contribute some $4.5 million toward Seattle’s affordable housing fund as part of the Housing Affordability and Livability Agenda.

Kaye is scheduled for completion in the second quarter of 2025. It is Skanska’s second project in the region, following the Alley111, and its seventh in the Puget Sound area.