The single-family rental market is on the rise, and lenders getting ready to jump in, according to a panel of investors and other sector experts at the NAREE Real Estate Journalism conference. 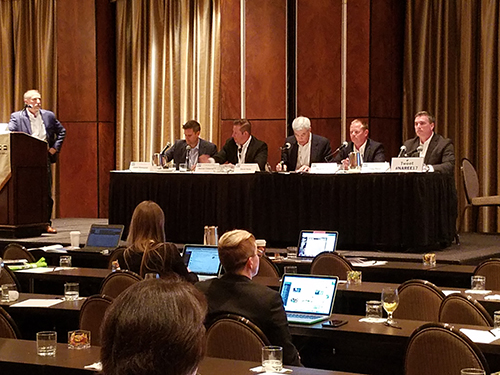 While the number of institutions buying into the single-family rental space remains small, investor interest continues to grow, according to a panel discussion during the National Association of Real Estate Editors’ (NAREE) 51st annual Real Estate Journalism Conference in Denver yesterday. And as data becomes more available, a wider variety of financiers are growing comfortable in the space, making it easier to transact the deals.

Institutional investment stalled as buyers were priced out of major markets due to rising housing prices, noted Daren Blomquist, a senior vice president with ATTOM Data Solutions. Mom-and-pop investors, meanwhile, have been able to buy up the lower-priced properties in secondary markets that have not appealed to the institutions. Indeed, of the 19 million homes owned by non-occupants, 75 percent are owned by investors with one to two properties, while just 3 percent are owned by institutions with 100 or more properties.

How much greater the institutional share of ownership will grow became a point for debate, with David Hicks, co-president of major house-buying franchise HomeVestors of America, affirming the economics will remain more favorable for smaller, local buyers, and Dennis Cisterna III, chief revenue officer of Investability Real Estate Inc., declaring that greater aggregation will improve efficiencies, resulting in a more favorable situation for institutions. He noted that the asset class has grown faster than any other, and Greg Rand, founder & CEO of single-family rental trading platform OwnAmerica, predicted that it will grow to a multibillion-dollar sector in the next few years.

The middle-tier investor remains the least advantaged, since it has been difficult to obtain financing and many transactions have been all cash. Recently, though, the government-sponsored enterprises have taken steps to enable debt capital for these deals, Rand noted, which will benefit the middle-market investor. Cisterna believes that will open the door for more lenders to step up, including debt contributions from the institutions that are currently focused on equity buys.