Rent growth remained unchanged year-over-year at 3.3 percent in October, according to a survey of 127 markets by Yardi Matrix. 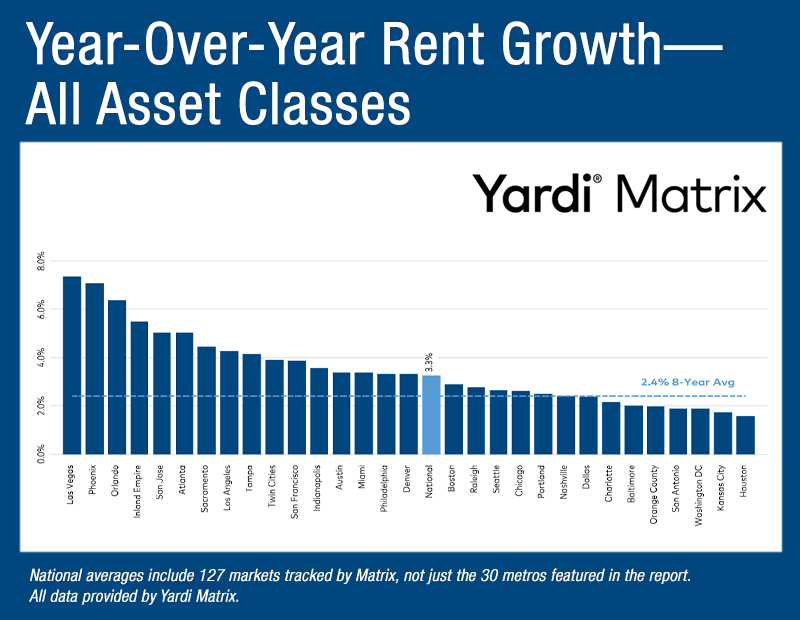 Despite a $1 drop to $1,420 in October—marking the second month of decline in a row—multifamily rents are stagnant. According to a survey of 127 markets by Yardi Matrix, rent growth remained unchanged year-over-year at 3.3 percent.

In terms of the top 30 market performers, Orlando has been pushed down from its top spot, dropping to third place when it comes to rent growth. Las Vegas has secured the new position, with a 7.4 percent increase due to a limited new supply and strong demand combined to boost rents. This is up from its 5.8 percent increase seen earlier this year in January. Following that was Phoenix, with a rise of 7.1 percent, where demand is fueled by rapid employment growth and domestic migration. The metro started at a 4 percent increase in January. Rounding out the top five was Orlando with 6.4 percent growth, Inland Empire with 5.5 percent and Atlanta with 5 percent.

Renter-by-necessity growth was a 3.9 percent, once again outperforming Lifestyle, which was at a 2.6 percent growth. These trends can be witnessed most within the bottom performing metros on a trailing-three month basis: Boston (-0.7%), Seattle and San Jose (-0.6%), Chicago (-0.5%) and Portland and Washington, D.C. (-0.4%), which all saw declines in Lifestyle rents due to an increase in luxury apartment deliveries.