The project is part of the developer’s busy pipeline in the Lone Star State. 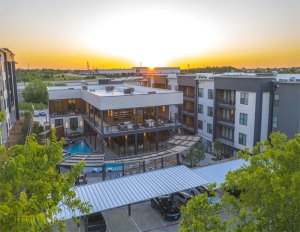 Presidium has officially added another luxury community to its residential portfolio in and around Dallas-Fort Worth. The firm completed Presidium Hill Street in Grand Prairie, Texas after breaking ground on the community in August 2020. Presidium began pre-leasing at the community in December 2021, before welcoming the first residents this spring.

An active Dallas-Fort Worth pipeline

Since being founded in 2003, Presidium has amassed a portfolio totaling approximately $2 billion of assets under management. The Texas-based firm’s portfolio mostly includes residential properties in its home state, but also has communities in Jacksonville, Fla., Santa Fe, N.M., Atlanta and Maine.

This year, Presidium saw plenty of activity in the Dallas-Fort Worth metro after breaking ground on some communities and started leasing at another. In April, the firm started construction on the first phase of the 344-unit Presidium Valley View in Farmers Branch, Texas, and is expecting to complete the community in late 2023. A few months later, Presidium started leasing the first phase of Presidium Berkshire, a 340-unit luxury community in North Fort Worth, Texas. The firm also broke ground on the 337,000-square-foot Presidium Frisco Square in Frisco, Texas this year.