While popular urban markets on the East and West coasts are seeing more apartment units created than jobs, Midwestern metros like Indianapolis, Des Moines and the Twin Cities are experiencing significant job growth and a dearth of multifamily housing to support it.

Metro employment numbers for the month of June indicate that while many of the cities that have dominated employment growth during the recovery continue to do so, there are a few diamonds in the rough in the sluggish Midwest.

For the last few years, metro employment figures have been much of the same. While the labor markets of the West and the South continue to thrive, the Midwest through the Northeast more or less plod along. The Midwest, as defined by the Census Bureau, has only seven metros with year-over-year employment growth of more than 2 percent, while Florida alone has eight. Yet some Midwestern metros have slowly experienced solid job growth that goes unnoticed.

Indianapolis, for example, has quietly expanded its total non-farm employment by 17.8 percent since the beginning of 2010, a full five percentage points more than the national average. Furthermore, it has continuously outperformed the national rate of growth for nearly all of the recovery cycle. The capital of the Hoosier State has seen broad based employment gains with nearly 30,000 jobs added during the last 12 months and no one sector accounting for more than 18 percent of the total growth. 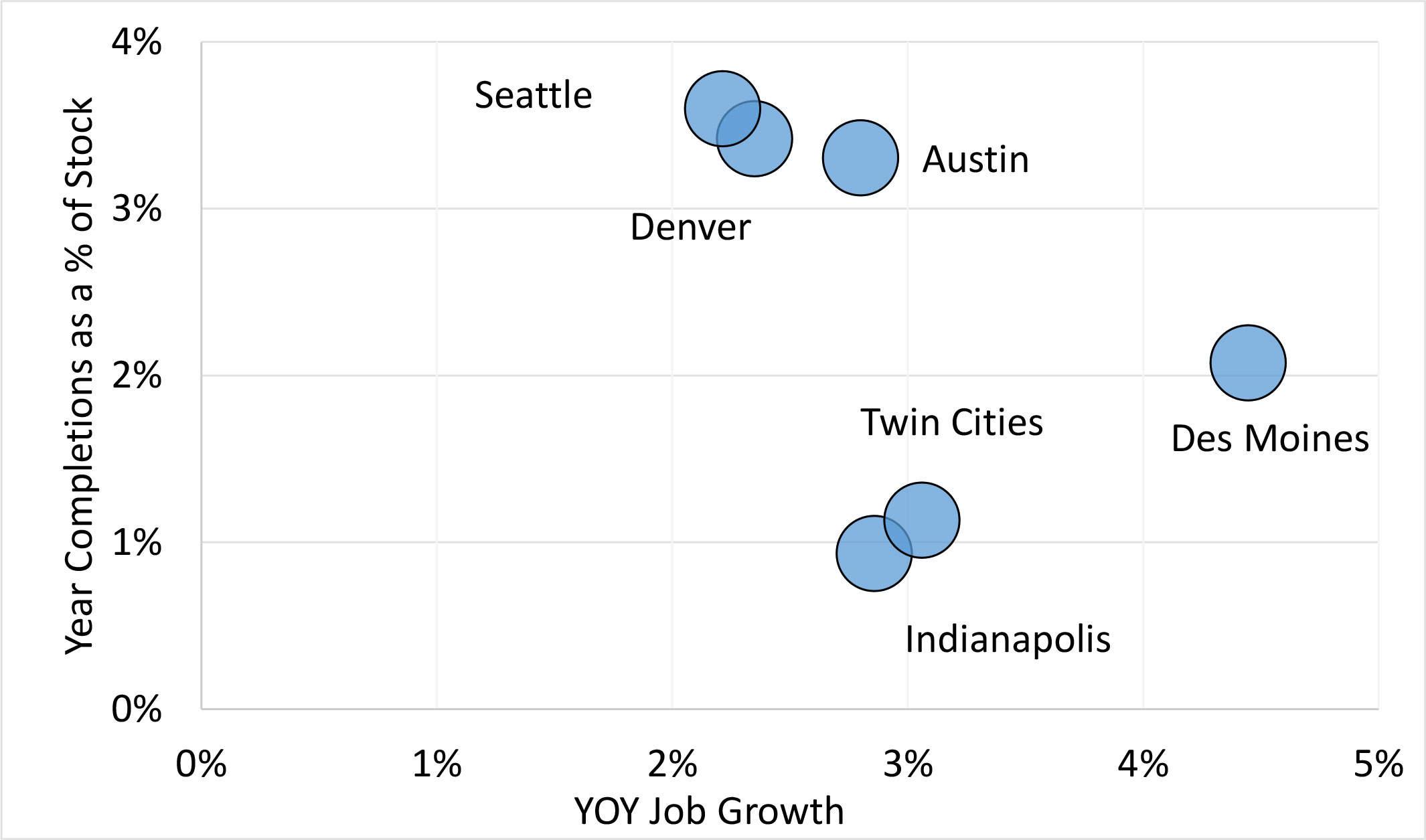 Of the 100 largest metros in the country, in June Des Moines, Iowa, had the highest employment growth in the country on a year-over-year basis. Des Moines’ financial activities sector, driven by a glut of insurance companies and a large Wells Fargo campus in the area, makes up a much larger share of the local economy than the national average. Yet it is not this dominant sector driving job growth. Rather, Des Moines has seen significant gains in mining, logging and construction; leisure and hospitality; and professional and business services. If Des Moines can persist in adding a more diverse set of jobs around its already strong financial activities sector, then it has intriguing long-term prospects.

The Twin Cities (Minneapolis-Saint Paul, Minn.) has seen every employment sector add jobs during the past year, but their growth is much more concentrated than that of Indianapolis or Des Moines. Half of the jobs added in the metro are either within education and health services or professional and business services sectors. The Twin Cities is already a diverse economy and this clustering of job creation is good news to the existing multifamily players in the market because jobs are being created in sectors that pay some of the highest wages on average.

These Midwestern cities aren’t just overlooked when it comes to reporting about job gains; they also appear to be overlooked by the multifamily industry. Comparing the aforementioned three cities with strong rates of job creation to three trendy markets, Denver, Seattle, and Austin, it appears that there is a supply imbalance on both ends of the spectrum. These markets are adding apartments at a faster rate than jobs can be created. According to Yardi Matrix, all three have added more than 3 percent to their apartment stock in the last year while seeing less than 3 percent job growth in that same period. The less popular Midwestern markets are currently experiencing the opposite trend, with the employment market growing at nearly twice the rate that new units are added in these cities. While some of this disparity can be explained by the difference in homeownership rates between the trendy and the overlooked, not all of it can.

This contrast has yet to completely manifest itself in the form of rent increases for these markets, but currently the Twin Cities (4 percent) and Indianapolis (2.7 percent) have higher year-over-year rent increases than Denver (2.3 percent) and Austin (0.7 percent), according to Yardi Matrix. Should the imbalance between job creation and new apartment construction continue, then this development will only accelerate in the coming years.