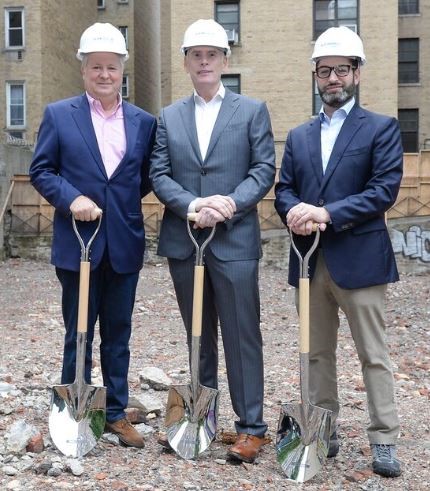 A joint venture between Landsea Homes and Leyton Properties has started construction on 212 W. 93rd St., a planned boutique condominium with 20 units atop a new 9,350-square-foot synagogue for Congregation Shaare Zedek. The development is being designed by Eran Chen of ODA New York.

“We tapped ODA New York to design 212 W. 93rd St. as a modern interpretation of the classic pre-war buildings in the Upper West Side as part of Landsea Homes’ continued dedication to deliver homes that embrace sustainability and neighborhood contextuality,” Thomas Graham, Landsea Homes’ president of the New York Metro Division, told Multi-Housing News. “We take pride in building great properties that are designed with the utmost sensitivity and respect for the environment and surrounding community.”

The partnership acquired the site from Congregation Shaare Zedek, which has been in the Upper West Side neighborhood for almost a century. The development team received a $40 million senior construction loan to begin the work.

“It is incredibly exciting to be building a best-in-class residential property that will also help the Shaare Zedek congregation stay in the neighborhood where they have had roots for nearly 100 years,” Scott Leyton, Leyton Properties’ principal, said.

According to Graham, 212 W. 93rd St. will offer a unique residential experience. The design of the property was inspired by the neighborhood’s historic pre-war architecture and will include interiors by Grade that celebrate refined, inviting and modern appointments throughout.

“The visionaries at ODA and Grade incorporated cutting-edge design with sustainable building practices, to yield distinct residences, many of which incorporate private outdoor spaces that were contemplated to be an extension of the home,” Leyton said.

A Bustling West Side of NYC

The property is situated between Broadway and Amsterdam Avenue in the heart of the Upper West Side, making transit, Central Park, Riverside Park and a bevy of museums, galleries and fine dining easily accessible for its future residents.

“The Upper West Side is a neighborhood that in the past has been underserved in the luxury market,” Graham said. “The completion of 212 W. 93rd St. will bring 20 new homes to the area that reflect modern living while giving the Congregation Shaare Zedek a freshly-designed space.”

Landsea Homes also recently announced the purchase of a development site at 540 6th Ave., situated among the downtown submarkets, Flatiron, Chelsea and Greenwich Village. The company will partner with DNA Development for another Manhattan-based project to be determined.

The Upper West Side will also be getting some new condos thanks to a partnership between SK Development and CB Developers, which have plans to build a 21-story, 38,000-square-foot mixed-use project at 214 W. 72nd St. that will include 18 condos and retail uses.