China is now home to a new, massive conference center. 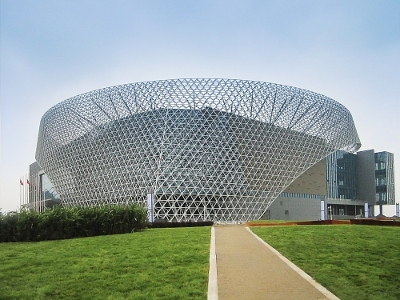 The newly developed conference center offers a total of 700,000 square feet of space and over 30 conference halls of all kinds, a large multi-function hall for 3,000, 2 prayer rooms and 2 press rooms. It was constructed by China Construction Eighth Engineering Division Corp. Ltd after designs by Atlanta-based tvsdesign, an architecture firm whose Chinese portfolio also includes the Galaxy Mall in Tianjin Culture Center and the Aquarium of Wanda Cultural Tourism City in Nanchang.

“The architecture of this conference center was inspired by ancient Chinese metaphors and strong Islamic artistic patterns, harmoniously merging elements of both cultures,” Rob O’Keefe, design principal for tvsdesign, said. “We designed the facility around a central outdoor courtyard, an element that becomes the facility’s epicenter, where people will meet, share knowledge and develop new ideas.”

According to the development team, the Ningxia International Conference Center will serve as an iconic symbol of cooperation between China and its neighboring Arab States. Its most notable design element is a steel shell, created by stitching together a circle and a square. Architects from tvsdesign worked together with the Arup structural engineering group on the screen, which consists of more than 30,000 individual structural framing members.

“The opening of Ningxia International Conference Center timely interacts with the starting moment of China to revitalize the ancient ‘silk road’ which connects the trading route between China and Arabic countries and Europe.” Yaomin Xue, director of Asian business development for tvsdesign, added. “This is another major convention center project in China tvsdesign designed after the Nanjing International Expo Center and Tianjin Meijiang Convention Center which is used for Davos World Economic Forum.”