The multifamily market shows signs of softening, driven by the economic deceleration, but rents gained another $19 in June, according to Yardi Matrix. 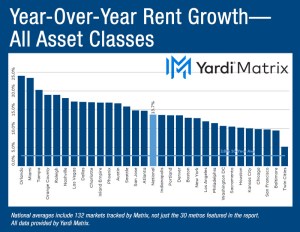 The U.S. multifamily market posted in June the fourth consecutive month with year-over-year rent growth decline, but performance is still higher than during any previous year on record, according to Yardi Matrix’s latest survey of 140 markets. The average U.S. asking rent increased $19 to $1,706, a new all-time high. The rise represents a 13.7 percent year-over-year increase, 50 basis points lower than it was in May and 130 basis points off the February peak. U.S. rents increased an average of 1.1 percent in June, 3.3 percent during the second quarter, and 5.7 percent through mid-year. The asking rent for single-family rentals rose to an all-time high of $2,071. National occupancy rates stood at 96.0 percent.

With the economy cooling down, rent growth will be buoyed by the strong labor market, albeit at slower rates. Inflation and increasing rates are impacting the investment market, which will benefit the rental markets. Florida metros continued to lead in rent growth—Orlando (24.0 percent), Miami (23.4 percent) and Tampa (20.3 percent), but even the bottom ranking metros posted solid gains—San Francisco (9.7 percent), Baltimore (9.4 percent) and Twin Cities (5.1 percent). Overall, asking rents increased by at least 10 percent in 25 of the top 30 markets, but some signs of slowing migration and/or household formation appeared. Occupancy rates decreased in 11 metros in May, led by Las Vegas (-1.6 percent year-over-year), Phoenix (-1.1 percent), Sacramento (-1.0 percent) and the Inland Empire (-0.8 percent), but continue to recover in San Jose (2.0 percent), New York (1.5 percent) and Chicago (1.4 percent).

On a monthly basis, asking rents nationally increased 1.1 percent in June, on par with the May gain, a $19 appreciation. The rate is below the 2021 growth, but well above pre-pandemic averages for May. Nationally, asking rents increased by $73 since the start of 2022. Rent growth was positive across the map, led by San Jose (2.1 percent), Raleigh (1.9 percent) and Seattle (1.8 percent). The lowest month-over-month increases were in Twin Cities, Phoenix and New York (each 0.6 percent). Lifestyle units were up 1.2 percent in June, while Renter-by-Necessity units followed closely, up 1.1 percent. All metros posted gains in both asset classes, with San Jose (2.1 percent Lifestyle, 1.9 percent RBN), Raleigh (1.9 percent Lifestyle, 1.5 percent RBN) and Orlando (1.7 percent Lifestyle, 1.5 percent RBN) posting the highest increases in both segments.

The biggest driver of rent growth is household formation, as people who lived with family or friends during the pandemic formed independent households, spurred by the surge in employment and savings. Foreign immigration, another factor driving demand, has dropped by about three-quarters over the last five years. In 2020, due to pandemic restrictions and tightening policies, that number was down to 270,000. The impact was harshest in large gateway markets that have depended on immigration for population growth for many years. Border states such as Texas, Arizona and Florida have also seen reduced immigration. Remote working has enabled many to relocate to the suburbs or the Sun Belt during the first phase of the pandemic, yet, since 1Q2021, rents and absorption have increased everywhere. This has made rents in Sun Belt and Western markets less affordable than they were a few years ago and metros such as Denver, Nashville and Austin have started to lose residents due to high housing costs.

The single-family sector maintained its performance on par with multifamily, with the asking rent up 11.8 percent year-over-year through June, or $23, to $2,071. In four metros, growth was above 20 percent: Orlando (46.7 percent), Miami (25.9 percent), Nashville (23,0 percent) and Toledo (22.5 percent). Occupancy decreased 10 basis points in June, with eight metros marking increases of 10 basis points or higher. On a month-over-month basis, national asking rents rose 1.1 percent in June, on par with multifamily. Demand for SFR continues to increase, sustained by the harder-to-achieve homeownership. A change in the demographic of the average SFR tenant is observed, with Millennials and blue-collar workers with children and pets comprising the majority.