Rent growth softened during the cold season, but ended the year at 13.5 percent, more than double any previous year, according to Yardi Matrix data. 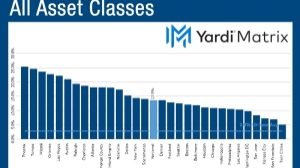 Rents rose another $2 in December, to $1,594, a new record. Overall, 2021 was a year of records for the U.S. multifamily market, according to Yardi Matrix’s survey: The annual rent growth of 13.5 percent was more than double any previous year, and apartment absorption counted nearly 600,000 units, which is roughly 50 percent more than the previous annual high, set in 2015. The single-family rental market continued to overperform the multifamily sector.

Throughout 2021, the average U.S. asking rent gained $190 and 2022 is forecasted to bring further gains in the multifamily market, at least by historical standards, but at a moderated pace, close to 5 percent annual increases. Possible headwinds include inflation and a new wave of COVID-19 cases.

On an annual basis through December, rents increased by double-digit percentages in 26 of the top 30 metros, six of which posted gains of 20 percent or more: Phoenix (25.3 percent), Tampa (24.6 percent), Miami (23.5 percent), Orlando (22.7 percent), Las Vegas (22.2 percent) and Austin (20.9 percent). In part, these exceptional rates are actually smaller because rent growth was generally flat in 2020. However, in some areas the jump is notable, such as in New York, where, after 14 months of negative rent growth, rents rebounded in July marking a 14.2 percent increase year-over-year in December.

Typical to the cold season, on a month-over-month basis, asking rent growth continued to decelerate, rising just 0.1 percent in December, with equal growth in both quality segments. However, metro numbers varied: 18 of Matrix’s top 30 marked gains, led by the Inland Empire (1.1 percent), New York and Charlotte (each 1 percent), six posted increases of 0.5 percent or more, and a dozen had rents decrease, with the worst performance registered in Portland (-1 percent), Raleigh (-0.7 percent) and the Twin Cities and Washington, D.C. (both -0.6 percent). On a trailing three-month basis, no metro had negative asking rent growth.

The pandemic induced new migration trends, which triggered robust changes in rent performance across the country. Based on rent performance by metro since the start of the pandemic’ Yardi Matrix draws a picture about demand and rent growth going forward. Between March 2020 and December 2021, asking rents have increased by 20 percent or more in nine of the top 30, and by 10 percent or more in 19 of the top 30. Only four metros had asking rents below pre-pandemic levels in December: San Jose (-4.8 percent), San Francisco (-2.1 percent), New York -0.1 percent) and Midland, Texas. Yet, demand is returning to these centers, as shown by the occupancy rate in stabilized properties, up 3.2 percent in New York, 2.9 percent in Chicago, 2.5 percent in San Jose and 2 percent in San Francisco in the 12 months ending in November.

The SFR market also posted a slight deceleration: Rents rose 13.8 percent year-over-year through December and occupancy rates were up 0.4 percent. The outlook for 2022 looks promising as the sector marked a notable maturation point in 2021, which drew in institutional investors and billions in capital, making banks more comfortable financing SFRs.