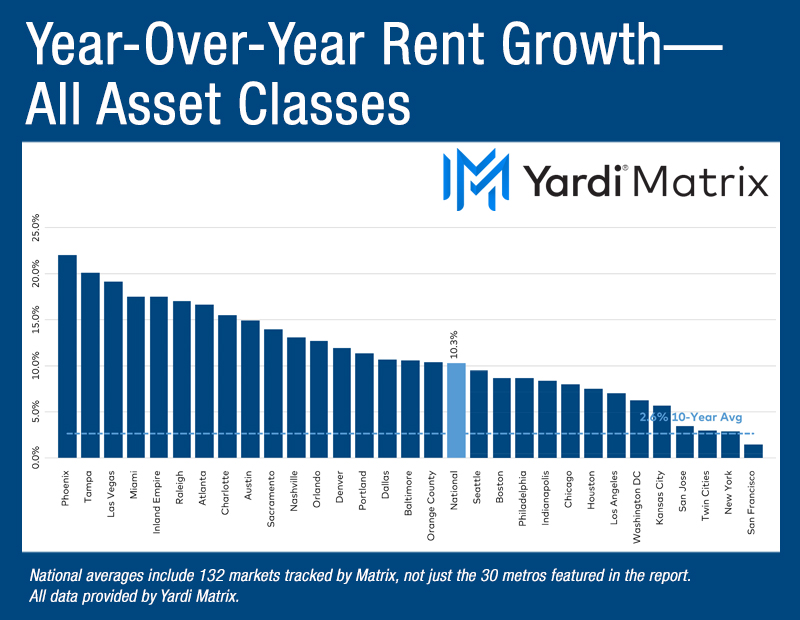 The national multifamily market continued its astounding performance, with asking rents posting the first-ever double-digit increase in Yardi Matrix’s dataset, up 10.3 percent year-over-year through August to $1,539. According to the August survey, all but two markets had positive year-over-year rent growth, with Queens (-0.5 percent) and Midland-Odessa (-5.5 percent) being the exceptions. August also marked the first month of positive YoY rent growth since the start of the pandemic across all top 30 metros. Tech hub markets remained in the lead: Phoenix (22.0 percent), Tampa (20.2 percent) and Las Vegas (19.2 percent). New York (2.8 percent) and San Francisco (1.4 percent) occupied the bottom positions and have yet to reach pre-pandemic levels.

Lifestyle rents (11.8 percent) continued to outpace the Renter-by-Necessity asset class (8.4 percent). On the occupancy side, the dynamic shifted, with Lifestyle marking a 1.5 percent rise from a year ago to 95.6 percent, while Renter-by-Necessity inched up just 0.5 percent to 95.7 percent. Overall, the occupancy rate increased 90 basis points to 95.6 percent. There are debates whether the end of the eviction moratorium will trigger a wave of evictions, but according to data collected from the National Multifamily Housing Council’s Rent Payment Tracker, in July, 94.9 percent of apartment households made a full or partial rent payment.

Even though gateway markets are rebounding, numbers are slightly misleading, as some of the YoY figures result from comparison to last August, when gateway metros were struggling. Comparing current rents to those in March 2020, five of the seven gateway markets surpassed pre-pandemic levels: Miami (16.2 percent), Boston (7.0 percent), Chicago (6.4 percent), Los Angeles (4.9 percent) and Washington, D.C. (3.9 percent). Miami and Chicago were among the leading metros in occupancy gains, marking increases of 1.7 percent and 1.4 percent. New York (-3.8 percent) and San Francisco (-3.2 percent) have a slower recovery due to companies delaying the return to office due to a Delta variant-generated surge.

On a month-over-month basis, rents rose 1.7 percent in August, with all top 30 metros posting positive rent growth and 26 of them had 1.0 percent growth or higher. Las Vegas (3.3 percent), the Inland Empire and Seattle (both 3.1 percent) registered the highest increases. Kansas City (0.2 percent), San Francisco (0.5 percent) and the Twin Cities (0.7 percent) occupied the bottom ranks. While San Francisco still deals with out-migration and limited supply (3.3 percent of stock delivered in the last 12 months, with the bulk concentrated in the Lifestyle asset class), Kansas City and the Twin Cities are returning to typical growth rates for Midwest cities.

The single-family rental segment continued to outpace multifamily, posting a 13.9 percent YoY rent improvement. All top 30 metros had positive rent growth, and 20 of them had double-digit increases. Tampa (38.4 percent) and Miami (26.7 percent) topped the list, but Orlando (5.9 percent) was second to last. The occupancy rate rose 1.1 percent nationally, with San Antonio (6.7 percent), Indianapolis and Houston (both 5.6 percent) in the lead.