Rents have decreased 0.5 percent month-over-month, according to a Yardi Matrix report on 127 markets. 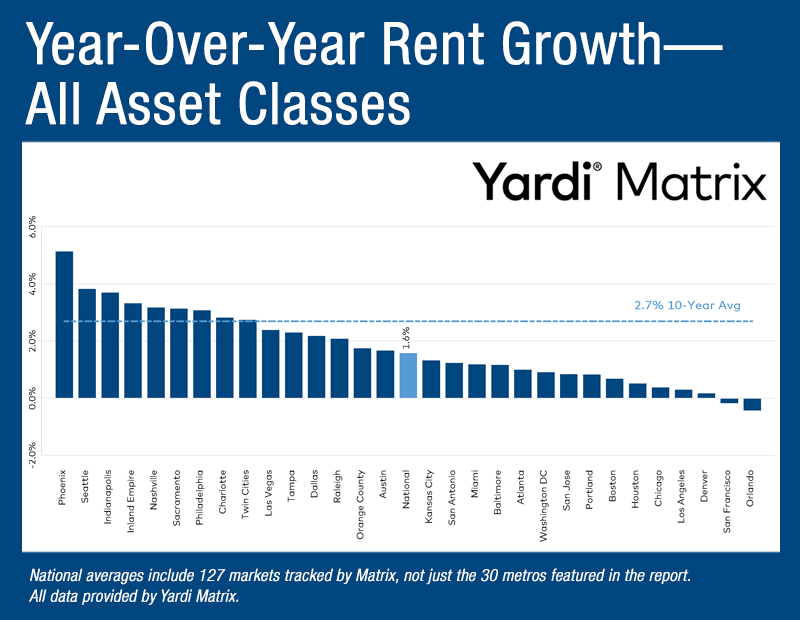 National rent growth is beginning to show signs of weakness, with April rent growth increasing only 1.6 percent year-over-year. According to a Yardi Matrix report of 127 markets, national rent growth has reached its lowest point since October 2017. Rents have decreased 0.5 percent month-over-month since March, showing how quickly the coronavirus has impacted the multifamily sector.

Lifestyle rents were hit the hardest, with 10 of the top 30 markets showing year-over-year decreases. Surprisingly, Orlando (-0.4 percent) and San Francisco (-0.2 percent) have shown the greatest declines year-over-year. Of the 30 markets in the report, 27 showed negative rent growth month-over-month, decreasing nationally by 50 basis points. This equates to a decline of $8 to $1,465, in which that large of a decline has never been recorded, even during the Great Recession, states the report.

“The number of unemployment claims continues to rise each week—reaching Depression levels. The April unemployment rate soared to 14.7 percent, the highest level since the BLS started recording monthly data in 1948,” states the report.