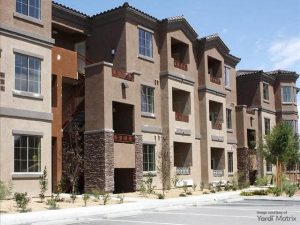 MG Properties has acquired Tribeca North Apartment Homes, a 312-unit community in North Las Vegas, for $81 million. CBRE brokered the deal on behalf of seller The Bascom Group, while Walker & Dunlop secured acquisition financing in the form of a Fannie Mae loan, which amounted to $44.7 million, as reported by Commercial Real Estate Direct. According to Yardi Matrix data, Bascom purchased the property in 2016 for $35.4 million, from PGIM Real Estate.

The 14-building luxury asset encompasses one-, two- and three-bedroom floorplans, ranging from 780 to 1,273 square feet. Yardi Matrix also shows that amenities at the property include a fitness center, three swimming pools, a clubhouse, a business center, two spas, as well as 641 parking spaces.

Located at 3825 Craig Crossing Drive on 21 acres, the Tribeca North Apartment Homes is roughly 8 miles north of downtown Las Vegas and 12 miles from the famous Las Vegas Strip. Residents also have immediate access to the retail corridor on West Craig Road, and to North Las Vegas Airport, which is some 3.5 miles south of the community.

Expanding across the state

With this purchase, the firm expanded an already extensive Nevada footprint, which includes the 1,077 units in Reno it purchased last year. MG properties President Jeff Gleiberman stated in prepared remarks that Tribeca North is in a very desirable submarket, with strong job and population growth throughout the past decade. The acquisition comes as an addition to the more than 2,000 units operated by the company in the greater Las Vegas area.