Apartment operating fundamentals throughout Chicago are expected to remain soft this year, particularly in the suburbs, according to the Marcus & Millichap’s 2010 National Apartment Report.

Chicago—Apartment operating fundamentals throughout Chicago are expected to remain soft this year, particularly in the suburbs, according to the Marcus & Millichap’s 2010 National Apartment Report.

Metro-wide, vacancy is forecast to reach 7.3 percent this year, 30 basis points higher than at the end of 2009. Asking rents are anticipated to drop 2.2 percent before the end of this year, while effective rents are predicted to decline 2.7 percent. 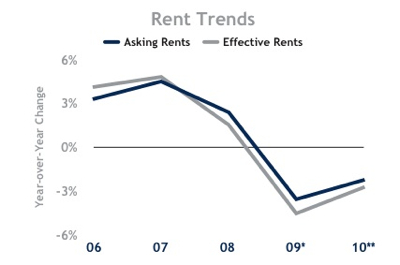 Meanwhile, “in larger developments in the city, we have seen an increase to 7.5 percent, which is high compared to previous years, but from an overall standpoint, isn’t that bad,” Przybyla notes. And because of the shadow market, effective rents are down about 1.5 percent, primarily due to increased concessions.

At the same time, the suburban market is seeing vacancy rates between the low-6 percent to high-8 percent range, according to Przybyla, and asking rents are down about 2 percent, with effective rents decreasing approximately 5 percent.

A considerable shadow market continues to pose a threat, particularly in the South Loop, however, according to the report. But, Przybyla points out, there was an increase in sales activity in December and January, so units are being absorbed.

Meanwhile, transaction volume has decreased and cap rates have reached the mid-7 percent range. Przybyla notes that there are two types of buyers currently interested in the market: those looking for stable apartments with solid occupancies and rents—which would mostly be in north of the city, as well as the CBD—and those investors looking for distressed properties, which are primarily west and south of the city. These buyers, notes Przybyla, are looking for “distressed sellers and assets that are selling very cheap—10 cents on the dollar.”

Deals involving out-of-state buyers will remain limited, though Przybyla notes that he does see some capital coming in from markets such as South Florida, Detroit and New York, “where they see values attractive to the market.” He adds, “Compared to other Midwest markets, we are a stable market. Even though there were downward trends overall, we didn’t get too out of whack with overpricing and overbuilding.”