Milwaukee has doubled its job growth in the last year; coupled with virtually no new construction, the market has one of the lowest vacancies in the Midwest.

Milwaukee—Milwaukee has doubled its job growth in the last year; coupled with virtually no new construction, the market has one of the lowest vacancies in the Midwest.

The overall metro’s vacancy is currently averaging about 4 percent, according to David Gaines, senior associate, National Multi Housing Group in Marcus & Millichap’s Chicago office. He tells MHN that this is 50 bps lower than last year, when it dropped 60 bps. Additionally, there are some areas that are even stronger—such as Greendale and Franklin— where vacancies are around 2 percent.

Developers are expected to add only 239 units to the existing stock this year, though there are 2,800 units in the planning pipeline. Only two of these projects, however, currently have scheduled completion dates, according to Marcus & Millichap’s most recent research report on the market.

The market has seen about 1.4 percent and 2.1 percent growth in asking and effective rents, respectively. The differential between asset classes is relatively extreme, however; asking rents for Class A units is, on average, $1,045 per month, whereas B and C assets are seeing asking rents of $736 per month. 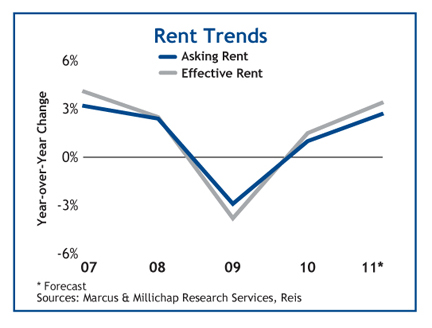 “The largest percent increase over the past 12 months has been in the Class A rents, so obviously at some point they will reach a point where they can only go up so high, which [will cause] more demand in the B/C assets,” Gaines points out.

Meanwhile, transaction velocity is picking up as more buyers step off the sidelines, Gaines observes, though it had slowed considerably, dropping 23 percent over the past 12 months. “The confidence is playing a pretty good role there just because the more buyers you have coming off the sidelines, the more competition you create for the assets and that helps drive the market. We’re definitely seeing a much higher confidence level right now than we were six, 12, 18 months ago.”

The median sales price for apartments now is about $48,500 per unit, which is still about 9 percent off the market’s peak. Cap rates were in the low-8 percent range, down 60 bps from the year prior, though Gaines observes that distressed properties are more in line with 10 percent cap rates.

Most of the interest in Milwaukee is from private buyers, as there’s not much institutional activity in this market—a point Gaines finds interesting because it’s equidistant from Chicago as markets that are considered suburbs of the Windy City.

While some out-of-state owners have become more willing to divest of their assets, developers who built new in the last five to 10 years are also looking to raise capital by selling existing projects and using the equity to fund new developments. 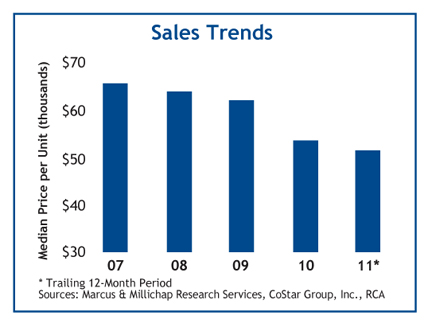 As for the future, Milwaukee continues to see job creation, as AT&T is expanding and hiring just over 100 technicians across Wisconsin, while Wal-Mart is expanding in South Milwaukee, Wauwatosa and Greenfield. A new South Milwaukee site, which recently received zoning approval, will employ up to 300 workers.

On the flip side, however, the median price of a single-family home $186,000, 8 percent lower than it had been over the last 12 months. At the same time, the median household income grew by 3 percent, so it is currently $8,500 more than the minimum qualifying income to purchase that median-priced home, Gaines explains. “As housing values come down and people’s incomes go up, at some point your top-tier tenants are going to start asking whether it’s better to keep renting and pay more than [they would] for a mortgage.”

Class A rents in the third quarter of 2011 were $78 dollars more per month than the average monthly mortgage payment; in 2010, those same rents were $100 less.