The 44-unit Vito Terrace Apartments in northwest Washington, D.C., has traded hands for an unspecified price. 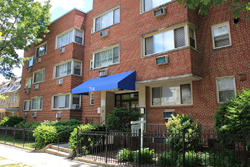 Manna, in cooperation with the property’s Tenants Association, plans to maintain the property’s affordability, while making moderate improvements as necessary. The community is distinctive in its Brightwood Park neighborhood setting, where most apartment buildings are three-story walk-ups. By contrast, Vito Terrace has elevator service, garage parking and storage areas.

Vito Terrace is just south of Parks of Walter Reed, the redevelopment of the former Walter Reed Army Medical Center, which is still in its early stages. Late last year, Washington, D.C., picked the Hines-Urban Atlantic-Triden JV as the project’s master developer, and early this year HUD signed off on the Local Redevelopment Authority’s plans for the site, which clears the way for the Army to transfer the property, pending an environmental assessment.

The Greysteel Co.’s Ari Firoozabadi, W. Kyle Tangney, John F. Mullen, Caleb Brown, Lance Ahmadian and Mike Bediones were Urban Investment Partners’ agents in the disposition. Tangney notes that there was “substantial interest” in the property because of the changing fundamentals of the submarket.

D.C.-based Manna specializes in developing and owning affordable multifamily housing, as well as providing support and low-cost mortgages to homebuyers. Urban Investment Partners, also based in the district, invests opportunistically in a variety of asset classes, with a primary focus on multifamily properties.