The study found that the average cost in the New York City borough continues to drop, but downtown is still thriving when it comes to condo, co-op and new development purchases.

The average sale price of a New York City apartment fell in the four weeks leading up to August 1, in addition to the number of sales. According to CityRealty’s Monthly Market Report, which analyzes sales and trends in Manhattan, apartment sales dropped 21 percent, from 1,207 to 948 units sold. The average apartment price also dropped, this time by 9 percent from $2.3 million to $2.1 million.

The top three sales for the month were as follows:

“CityRealty’s September Manhattan Market Market report showed a mixed picture for the condo and co-op markets. Average prices for condos were down from $2.3 million the prior month to $2.1 million this month. This decrease can be explained, in part, by the large number of closings—over $100 million in sales—recorded the prior month at one of the city’s priciest new developments, 56 Leonard St.,” Gabby Warshawer, director of research at CityRealty, told Multi-Housing News. “There were no new developments this month that had such a high volume of closings, underscoring the extent to which a large new development can affect the overall Manhattan numbers. The picture is mixed, though, because the average price for co-ops increased from $1.5 million last month to $1.6 million this month. Since co-ops are generally less expensive than condos, this indicates buyer enthusiasm for apartments at more moderate price points.”

The least popular areas for condo sales were the Financial District and the Upper East Side, accounting for 8 percent ($94 million) and 13 percent ($157 million), respectively. Out of the total 18 neighborhoods featured, Midtown’s Turtle Bay/United Nations, the Upper East Side’s Carnegie Hall and the Upper West Side’s Lincoln Center areas all had the lowest amount of sales over the past 30 days. 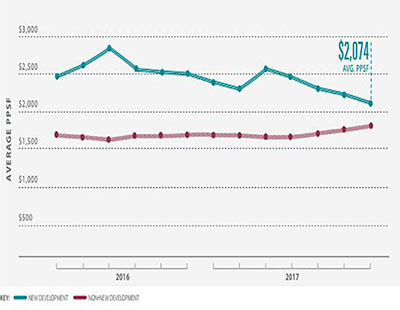 The average sale price of new developments was $3.9 million in the month of August. The average price per square foot came out to $2,074, which was an 8 percent drop from July. Year-over-year, this calculated to an 18 percent drop. There was a decrease in development sales, from 156 recorded in the previous month to 106 for August. Of the total, 26 percent of recorded sales were for condo units. The difference between new and non-new development prices was $314, a plummet from last years $785 difference. The aggregate sales total of new developments was $410 million, with 35 percent of that number accounting for condo sales.

Downtown dominated once again in popularity, with 37 sales totaling $198 million. Following that was Midtown with 36 sales totaling $98 million, the Upper East Side with 37 sales at $65 million and the Financial District totaling $46 million across 12 sales. The Upper West Side was last pick, with only one sale for the month of August, coming in at $4 million.

Image and graph courtesy of CityRealty