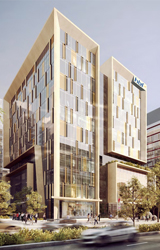 Perth, Western Australia—Leighton Properties has recently broken ground on its fourth office tower at the Kings Square precinct, a key component of the State Government’s multi-billion dollar Perth City Link TOD. The company is developing the building on behalf of Seven Group Holdings.

Known as the Kings Square Four, the property will be owned and occupied by Western Australia’s largest health insurance provider, HBF. Upon completion by mid-2015, the new 10-story structure will offer a net leasable area of more than 215,000 square feet, including approximately 140,000 square feet of office space. Amenities will include 89 bike racks, lockers and showers, as well as 49 car parks with five motorbike bays.

Designed by Cox Design Group, the KS4 project aims to achieve a 5 Star Green Star–Office Design V3 rating from the Green Building Council of Australia, as well as a 5 Star NABERS Energy rating.

“HBF’s new building at Kings Square is the fourth major building to get under way in this precinct. Shell Australia, DEXUS Property Group and John Holland have already started construction. Between them, these four buildings will house more than 4,000 workers and are due for completion in mid-2015,” Planning Minister John Day says.

Perth city’s landmark Kings Square development currently under construction is set to include a total of seven office towers, as well as bars, restaurants, shops, 520 apartments and an abundance of community spaces. The project will link King and Lake streets following the sinking of the Fremantle rail line to reconnect the CBD and Northbridge.

“The caliber of the companies that have already signed on to be part of this exceptional project is testament to the State Government’s investment in transforming Perth’s CBD and a vote of confidence in the future of Western Australia,” the minister says.

Overall, the Perth City Link transit oriented development is expected to attract billions of dollars in private investment and accommodate more than 13,500 workers. The next phase of the project slated to begin in early 2014 will include the completion of rail works and the construction of an underground bus station.