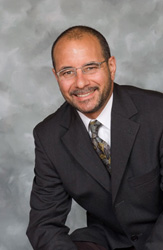 The REEC Board is made up of 14 members, each of whom serves a maximum of two consecutive three-year terms. Sykes will succeed Quintin E. Primo III, who served as Chairman of the REEC Board since the inception of the organization in 2003. Sykes previously held the Vice Chairman position under Primo for three years.

As president of New Boston’s USA Fund, Sykes is responsible for the supervision of the partnership equity placement, the identification of potential and actual investments and developments, as well as the management of the Fund’s day-to-day business operations. He specializes in the creation of urban mixed-use, mixed-income developments, including Olmsted Green in Dorchester and One Greenway in Boston’s Chinatown neighborhood.

Sykes also serves as co-chair of the Urban Land Institute (ULI) Responsible Property Investment Council and as a member of the organization’s N.E. Executive Committee. He is on the advisory board for Northeastern University’s School of Urban and Public Policy, The Rappaport Institute of Public Policy at Suffolk School of Law and the Initiative for a Competitive Inner City. In addition, Sykes is the current Chairman of the Federal Reserve Bank of Boston and a Commissioner on the City of Boston’s Civic Design Commission.