For potential Manhattan renters, a building’s age is not just a number, according to a new report from RentHop. But just how much of a rent difference is there between pre-war and post-war buildings?

New York City has been experiencing a steady residential boom, with 6,900 units completed in Manhattan in 2016 alone. With a significant amount of new supply on the market, renters have a wide variety of buildings to choose from, whether they prefer the new high-rises or the charming pre-war structures, but rent plays a large role in where someone can ultimately decide to live. While one might assume an older building will mean cheaper rent, a new report from RentHop, utilizing NYC’s PLUTO database, reveals this isn’t always the case.

New York City is an old city, which is reflected in the style and age of many of its residential buildings. The median age of a surviving residential building is about 90 years, largely due to the 63 percent population growth between 1900 and 1920 that resulted in a construction boom during that era. 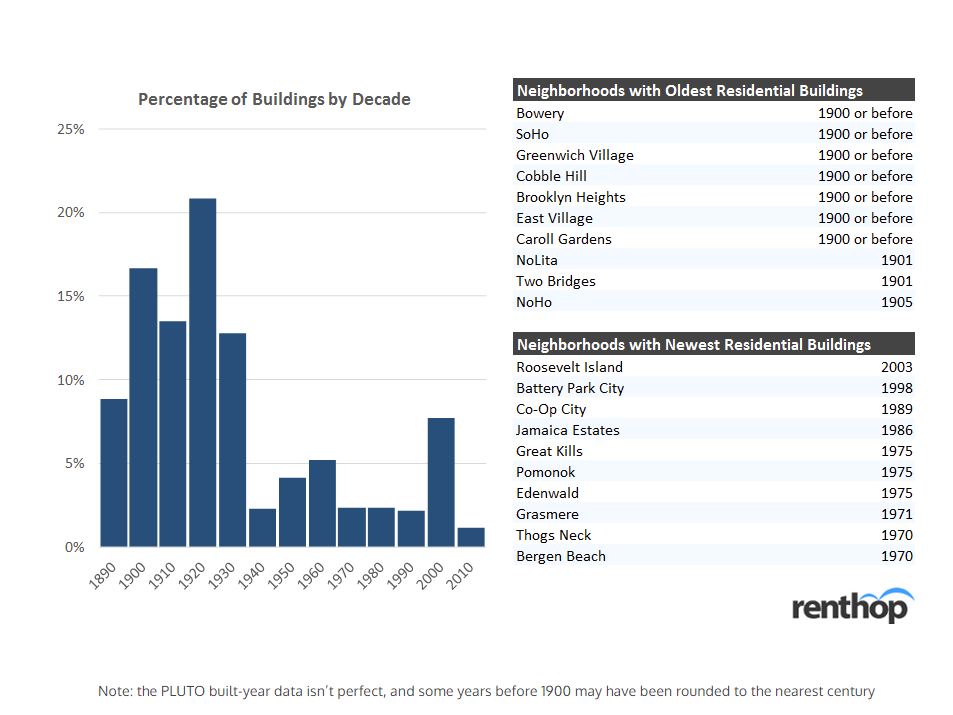 Despite their older age, these pre-war buildings don’t necessarily offer cheaper rents than their newer counterparts. While across neighborhoods the average pre-war apartment (a one-bedroom unit with an elevator in the building, for the report’s purposes) is around 10 to 12 percent cheaper, or $6 cheaper per year of age, this isn’t the case in every neighborhood.

Manhattan’s oldest submarkets, including SoHo, Greenwich Village and East Village, largely coincide with zones of historical district designations, meaning the building stock in these areas predominantly comprise older rental apartments. But rents there are not cheap—in some, rents are the highest in the borough. This is due to the reduced number of available rentable units and zoning restrictions, which make elevator buildings particularly in-demand in these areas. In addition, while the exterior of many of these buildings are pre-war, many of them have undergone high-end renovations with modern interiors, which boosts up the rents. 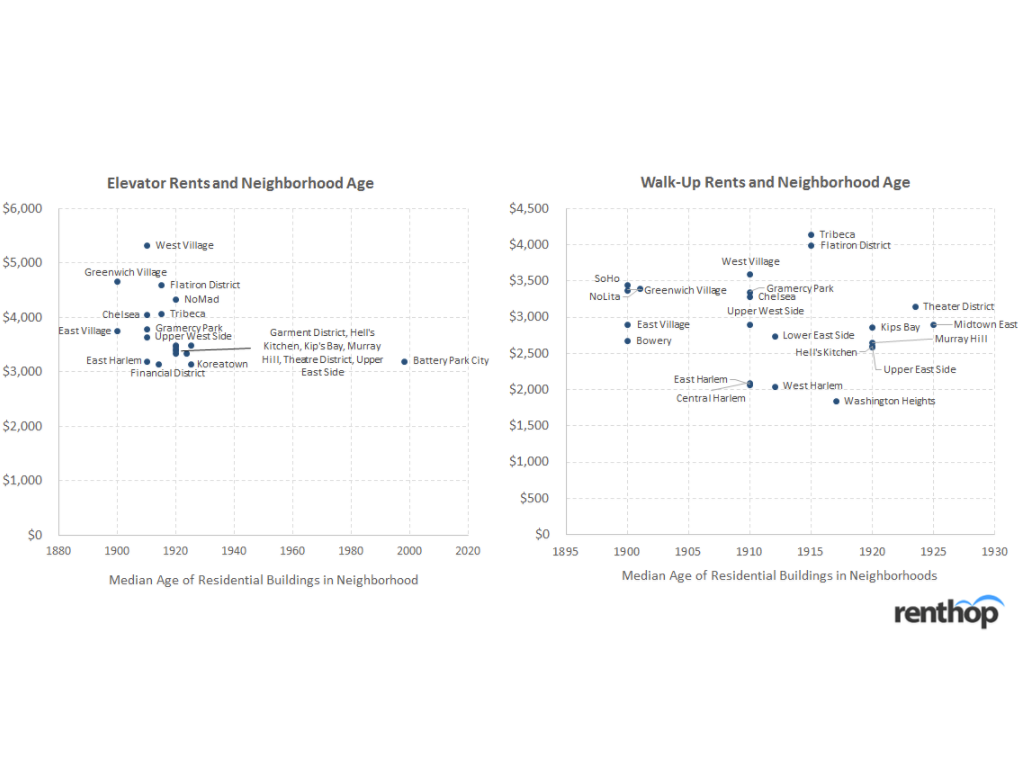 On the other end of the spectrum, Roosevelt Island, Battery Park City and Co-Op City are New York City’s newest neighborhoods. The median age of a residential building in Battery Park City is 19 years, with hardly any pre-war buildings in the submarket. The neighborhoods consist of almost entirely mid- to high-rise residential buildings, with the newer apartments being significantly more expensive than older apartments.

Take a step inside

In general, there is a positive relationship between building year and rent when looking within a neighborhood, meaning that older buildings tend to be cheaper. In Hell’s Kitchen, renters can expect to pay 18 percent less on a pre-war unit, while Upper West Side renters will get a 17 percent discount for an older apartment. But some neighborhoods like Flatiron and Gramercy Park, which are smaller in size or have less supply of available units for rent, the relationship isn’t as strong. For older neighborhoods like Greenwich Village and East Village, there isn’t much rent difference between a property built in 1915 versus a property from 1930, the report noted.

Despite the differences within neighborhoods, potential renters that are on a budget should consider looking at older or pre-war buildings, with rents beings $6 cheaper per year of age, on average. Pre-war apartments tend to be less expensive than their modern counterparts, and residents could be surprised by the interior renovations and upgrades that have been done to offer similar amenities to newer buildings. Renters who have a bit more money in their budget can look to modern, luxury buildings, but even renting in one that is a few years older could shave off a significant amount of rent.