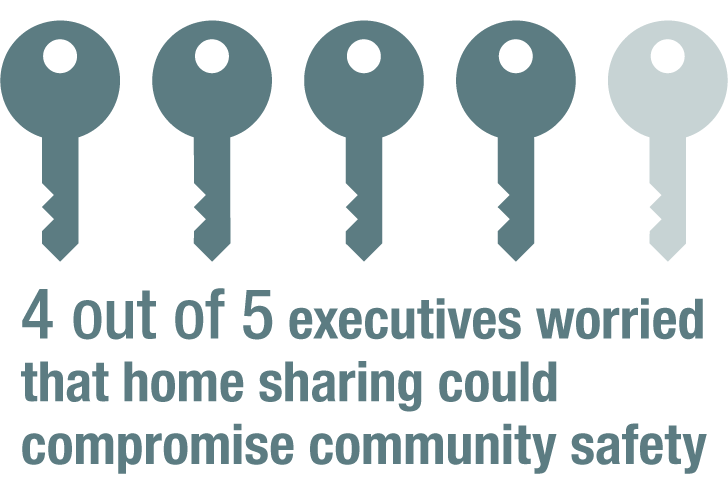 In spring 2015, Airbnb passed a major milestone, reaching one million rooms listed on its home-sharing platform. Since then, the tech company has more than doubled its online room inventory to 2.3 million listings, challenging traditional hotel titans. This rapid growth in home sharing—led by Airbnb but also propelled by brands like VRBO, HomeAway and FlipKey—has sparked debates about the role of short-term rentals in communities across the country.

In some areas, short-term rentals are banned. While some municipalities are happy for things to stay that way, others are feeling pressure to revisit the issue. And in areas where the practice is permitted, there’s often growing concern over potential negative repercussions should it go more mainstream.

For the apartment industry, many of these same debates are playing out at the community level. According to a recent NMHC survey of executives with the nation’s largest apartment owners and managers about home sharing, 43 percent indicated that residents had listed their apartment homes on short-term rental sites. However, only 1 percent of those respondents say they have on-site policies that allow it.

But as technology advancements and growth in the overall on-demand economy help expand home-sharing platforms, many apartment firms are going to have to make important business choices about how home sharing either fits or doesn’t fit into their community value propositions and management practices. 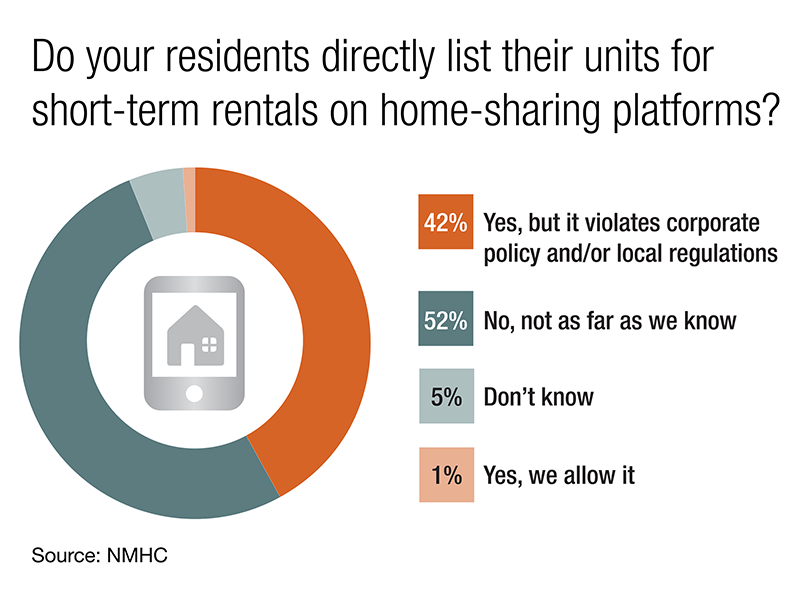 Apartment owners and managers express a variety of concerns about having home-sharing guests in their communities.

Topping the list are concerns about the safety of the residents, with 80 percent of respondents to NMHC’s home-sharing survey terming this a big issue. Apartment firms invest big dollars in resident and employee background screenings and sophisticated security measures to ensure their communities remain safe places for everyone living and working there.

Given that safety is a priority, the idea that home sharing could give unvetted people access to their communities is unsettling for property owners and managers as well as residents. But how such risks compare to those associated with existing guest policies—which routinely allow for unscreened people like residents’ visitors, delivery people and short-term service contractors to be on site—is a matter for debate.

Somewhat related is the issue of risk management. Nearly three-quarters (74 percent) of NMHC’s survey respondents indicated that liability and insurance was a top-three concern.  What worries apartment executives is that home sharing could expose their communities and companies to undue risk related to property damage, personal injury and other situations. And some feel that it’s a tricky tangle to figure out who is responsible and who pays should such unfortunate situations arise. 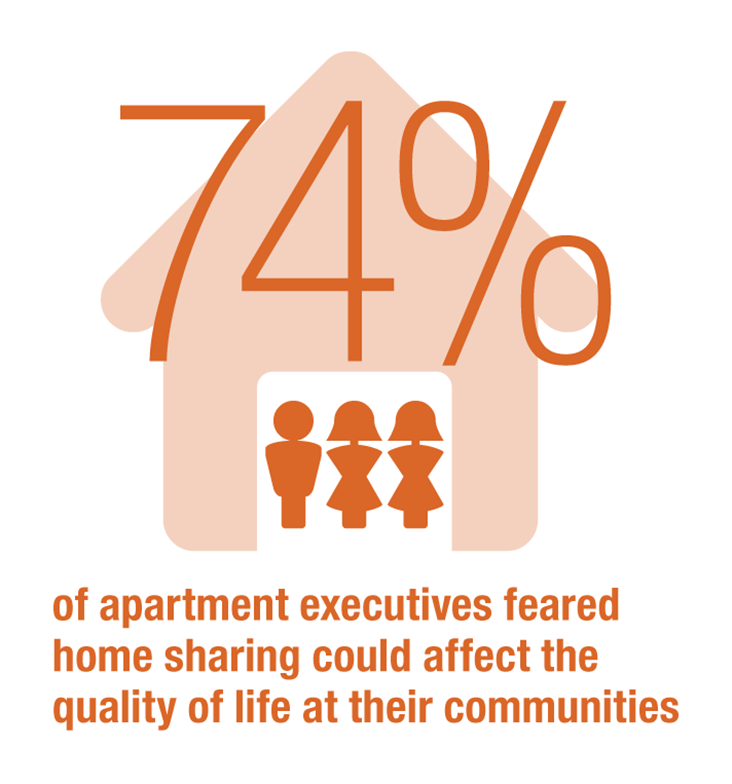 A large majority of apartment executives (74 percent) also rank a potential negative effect on the quality of community life and/or community character and dynamic as a big reservation. The fear is that too many short-term guests will create a transiency that undermines both property and neighborhood appeal.

As concerns and criticisms of home sharing have surfaced, Airbnb has led the nascent industry’s response, proactively trying to address concerns ranging from local lodging taxes to potential for discrimination. With respect to apartment firms’ discrete concerns, the tech company in mid-September launched its multifamily-focused Friendly Buildings Program.

The program aims to further expand the company’s growing platform while providing apartment owners and managers with more visibility, more input and perks for allowing the company’s users to book short-term stays at apartment properties. In addition to beefed-up background checks for users and a flexible $1 million-per-booking insurance policy to cover potential unit or building damages and losses, participating apartment firms will have:

■   Transparency regarding home-sharing activity in their buildings, including notification of upcoming trips booked at their properties, pertinent reservation and guest information, and commission details;

■   Control over home-sharing activity through lease addendums setting parameters and restrictions along with activity reports; and

■   An opportunity to capture ancillary revenue through customizable commission percentages.

The company has had the program in development for more than a year, first presenting the idea of a partnership program at the 2015 OPTECH Conference & Exposition.

While some executives plan to take a hard pass on the program, those that were more amenable to the idea saw potential benefit from the partnership, including increased ancillary revenue, more brand awareness, the ability to create and market a new community amenity and an affordability offset strategy for residents.

However, a patchwork of local laws may prove to be the biggest hurdle for the program to clear. Thirty-five percent of the apartment executives surveyed by NMHC cited the violation of local laws as a significant home-sharing concern—one that is limiting their ability to take part in this emerging trend.

In fact, nearly one in 10 executives surveyed (9 percent) said they would participate in a partnership program along the lines of what Airbnb has suggested if their local jurisdictions would allow short-term rentals.

But the flexibility of anti-home-sharing jurisdictions is unknown. Some cities are digging in their heels and aggressively cracking down on illegal home-sharing activities. New York and San 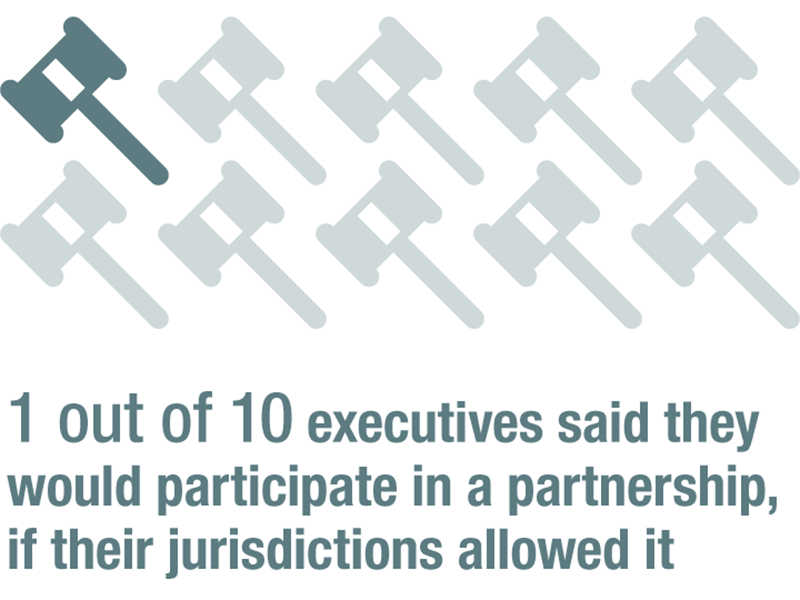 Francisco have blazed the trail domestically, but pushback is happening in cities around the globe, including tourist hot spots like Barcelona, London, Paris and Vancouver.

And they are getting a helping hand from an outcrop of tech startups that promise to identify short-term rentals that violate building regulations and local laws.

But the home-sharing industry isn’t rolling over that easily. Airbnb, for one, has been mobilizing its users through the creation of city-based home-sharing clubs to advocate for the tech-turned-lodging platform.

The company has also solicited the help of investors, celebrities and other tech giants like Facebook, Google, PayPal and Twitter to back its lobbying efforts. And then there’s the litigation.

While this drama may have a limited effect on apartment owners and managers in the immediate term, there will likely be spillover of some sort once some of these key battles are decided. The apartment industry should protect its members’ rights to participate in all aspects of the sharing economy, if they so choose, as long as it is done in full compliance with existing laws and regulations. To that end, continued dialogue between home-sharing service providers and the apartment industry remains critical.

Originally appearing in the November 2016 issue of MHN.