Construction is under way on Elevation at County Line Station, a 265-unit apartment property in Englewood, Colo. 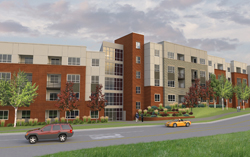 Englewood, Colo.—Construction is under way on Elevation at County Line Station, a 265-unit apartment property in Englewood, Colo. The development is on eight acres, and counts as TOD, since it’s directly adjacent to the County Line Road Park-n-Ride, and a short walk from the light rail station across I‐25. Denver-based Grand Peaks Properties is the developer, with KTGY as the apartment’s designer. The TOD, whose formal address is at 8331 S. Valley Highway, is slated for completion in the fall of this year.

The four-story, four-building property will feature one-, two- and three-bedroom units ranging in size from 749 square feet to 1,277 square feet, with walls of glass overlooking the mountains. Common amenities include a light rail commuter lounge, a cyber cafe, 24-hour fitness center, business center and a rooftop clubroom with an outdoor deck. Elevation at County Line Station is also pet-friendly, with a “paw spa” (dog wash), and features garage parking, an EV charging station and bicycle borrowing.

Englewood is part of the Denver-Aurora MSA, and is connected to downtown by the C and D lines on the local RTD light rail system. Demand for apartments along much of the system has proven high.

The redevelopment of Union Station in downtown Denver will be finished later this year, creating a transit hub that connects train, light rail, bus and other transportation options in one location. According to investment specialist Marcus & Millichap, the project has been a catalyst for development throughout the area, with nearly 4,000 apartments are under construction in the CBD and several projects in the path of rail lines.