Morgan A. Stewart, partner at Manly, Stewart & Finaldi, took some time at this year's NMHC OpTech conference to talk about the legalization of marijuana and the impact on the multifamily industry. 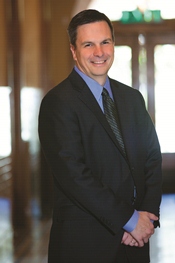 San Diego—A controversial topic was discussed during the recent OpTech conference in San Diego. The issue at hand doesn’t have a solution yet, but it’s a growing problem for some apartment communities.

Colorado and Washington started a new trend in 2012 when they legalized the recreational use of marijuana. Other states such as California have legalized medicinal use. Morgan A. Stewart, partner at Manly, Stewart & Finaldi, spoke about the implications of legalization at the NMHC OpTech conference.

“Contrary to the state’s legalization, federal law still says that the use of marijuana in any form is illegal as it is classified as one of the most dangerous drugs out there,” Stewart said. He added that the federal government, at this time, holds marijuana in the same class as heroin—not even cocaine has this high of a classification. So even though California legalized marijuana in a medicinal sense, the U.S. government does not recognize any medicinal use for the drug.

There have been talks to lower the classification but that still doesn’t offer a solution to the problem. So how do multifamily owners and operators prevent the use of marijuana in their apartment communities in states where it’s legal in one form or another?

In recreational states, the best way to prevent this is to outline it in the lease. Specifically state “no marijuana use on this property,” Stewart said. It’s not as easy to just put the “no smoking” clause because marijuana can also be ingested in an edible form.

When it comes to medicinal states, it gets a little more difficult. Trying to impose no marijuana clauses in medicinal areas is more difficult. When trying to enforce these rules you’re actually breaking Fair Housing Rights, Privacy Rights and HIPAA Rights because it’s a prescription medication. Legally, as an owner, you can’t tell your resident that they can’t take their prescribed medicine on your property. You can’t even enforce a non-smoking clause because some doctors prescribe marijuana in a smoking sense because it can deliver relief more quickly that way.

Until the federal government becomes more hands-on regarding the legalization of marijuana there won’t be a clear-cut solution to these roadblocks that apartment owners are facing now. Most leases state that residents won’t break federal or state law while on the property. But how do you enforce this clause when the state and federal laws go against one another?

According to Stewart, this topic will continue to generate discussion for years to come, especially with more states talking about hopping aboard the marijuana express—for tax revenue purposes among other reasons. There will be more legal cases between apartment owners and residents. Only then will owners get the clear cut answers they desire.