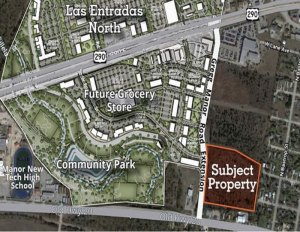 DD&B Construction has acquired a Manor, Texas, site earmarked for an approximately 200-unit multifamily development. The parcel, which is likely to include up to 20,000 square feet of retail space, was sold by Las Entradas Development Corp.

Located at E. Hwy 290 and Gregg Manor Rd. in Manor, the site is within Las Entradas, a 200-acre master-planned mixed-use development along Highway 290.  The community offers a neighborhood commercial center, conference center, 59-acre park, hiking and bicycle trails and an amphitheater bordered by the project’s lake and Gilleland Creek.

“Initially, the city was opposed to a zoning change that would have allowed only garden-style apartments,” Baird told Multi-Housing News. “Being that the buyer was not local, Avison Young recommended both a civil engineer and entitlement attorney that had extensive experience working with the city. In the end, the buyer agreed to incorporate a retail-commercial component, which would accommodate the city’s desire for a road extension through the property.”

The Avison Young team worked to prove that market rent and sales comps would support the seller’s pricing, Baird said. “The team had been transacting in Manor for the previous three years, transacting on more than 1,200 units between 2020 and 2021,” he added. This summer, the firm closed a $40 million transaction involving a Las Vegas apartment community.