Financing for the affordable projects included LIHTCs and tax-exempt bonds. 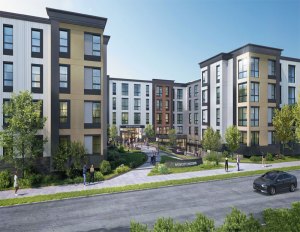 The District of Columbia Housing Finance Agency has completed financing that will enable the development of two new Washington, D.C., affordable apartment communities. The construction of the 49-unit 3450 Eads St. will take place in the River Terrace neighborhood of Ward 7. Construction of the 169-unit Belmont Crossing will take place in the Washington Highlands neighborhood within Ward 8.

“In 2022, there was significant volatility in the capital markets and for construction pricing,” Christopher Donald, CEO of DCHFA, told Multi-Housing News.

“When the year began, construction loans had interest rates in the mid-threes, which increased to the mid-sixes by the end of 2022. This resulted in strain for project partners with increasing capitalized interest costs, as well as smaller permanent loans. Additionally, construction costs in the District have increased substantially in 2022.”

DCHFA maintained an ongoing dialogue with project sponsors to grasp the always-evolving project budget and capital stack resulting from the volatile market, Donald added. “As a result of Mayor Bowser’s historic investment in the Housing Production Trust Fund, sufficient gap funding was available and funding gaps were addressed in real time,” he said. “Project financing provided by the District was timely and never resulted in project delays. D.C.’s housing partners, including the DCHFA, the Office of the Deputy Mayor for Planning and Economic Development, and the Department of Housing and Community Development, have all been very agile operating under extraordinary market conditions.”

Gilbane Development Co., MED Developers, Equity Plus Manager LLC and Housing Help Plus will serve as developers of the community. Unit mix will feature eight four-bedroom, 44 three-bedroom, 49 two-bedroom and 68 one-bedroom apartments. Among the highlights of the amenity suite will be a business center. Last month, DCHFA funded a $105 million affordable development called Park Morton, Phase I.