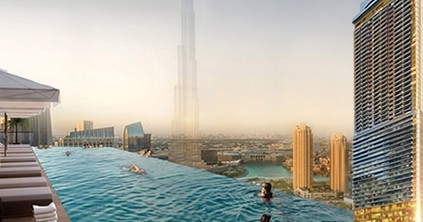 The 64-story building will feature a sky lobby commanding views across the Burj area, a private Paramount Pictures screening room and a rooftop infinity swimming pool overlooking the Downtown area. A terrace and a fitness center with spa and wellness options will also be among the common-space amenities. Each individual guest room will grant access to a movie library of more than 3,000 titles.

The residences, located on the 36th and 64th floors, will dispose of separate living and dining areas, combined with the same amenities and service as in the case of the guest rooms. Units will be available in one-, two- and three-bedroom designs, in addition to two exclusive penthouses. Prices for the hotel residences will start at about $490 per square foot (AED 1,800).

The partnership has a number of other joint projects under construction across the Middle East. DAMAC Towers by Paramount Hotels & Resorts is a four-tower project in the Burj Area, based on a similar concept, due to open in late 2016. DAMAC Tower by Paramount Hotels & Resorts in Riyadh, KSA will offer 200 furnished and serviced residences of varying sizes, including studios, one, two and three bedroom apartments. They are also developing Paramount Hotel Dubai Jumeirah Waterfront in Maritime City and several serviced villas within the AKOYA by DAMAC golf community.

The development is scheduled for completion in the third quarter of 2019.