DAMAC Properties, one of the largest luxury real estate developers in the Middle East, has announced the release of a new phase at its Capital Bay luxury multifamily project in Dubai’s CBD. 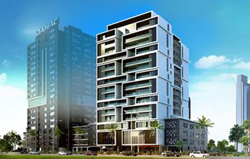 Dubai—DAMAC Properties, one of the largest luxury real estate developers in the Middle East, has announced the release of a new phase at its Capital Bay luxury multifamily project in Dubai’s CBD.

The new 131-unit luxury project will comprise studios and one-, two- and three-bedroom serviced units and will be located adjacent to Capital Bay’s existing two towers in Business Bay, offering access to Dubai’s International Financial Center and the myriad of shopping, dining, cultural and entertainment options afforded by downtown Dubai, such as The Dubai Mall and the Meydan Racecourse. All units come with a fully equipped kitchen, including glassware and tableware, as well as furnishings, washer, dryer, Wi-Fi, maid service and a daily supply of toiletries. Amenities include a swimming pool, kids club and restaurant. Previous Capital Bay phases include a sauna, spa, state-of-the-art gym, specialty shops and coffee lounge.

Construction is set to kick off next month with a targeted completion in 2016’s fourth quarter. Per-unit pre-launch prices start at $281,000 (AED 1,032,000). Although dubbed a serviced hotel apartment project, buyers can choose to use units as a personal residence (condominium style) or add it to DAMAC’s rental pool to be leased out similar to an apartment or hotel unit. Owners can take advantage of the rental pool model in case of extended absences as well, gaining an extra income from their home, especially in the growing tourism industry and hospitality housing market of Dubai. Jones Lang LaSalle’s latest data shows that in 2013 Dubai had a hotel trading performance of 79.6 percent with a RevPAR of $198 and an ADR of $244.

The new project will be managed by NAIA by DAMAC, DAMAC Properties’ newest hotel management company, launched just a few days ago at the Arabian Travel Market. The new serviced hotel apartment operator is expected to manage over 2,200 units across Dubai by the end of the year. These include NAIA Downtown Jebel Ali, which becomes operational this month and the soon to open NAIA Downtown AKOYA, NAIA Miracle Garden, NAIA Dubai World Central, NAIA Jumeirah Village, NAIA Business Bay and NAIA AL Maktoum Airport Street.

“We see a big market for NAIA by DAMAC serviced living in Dubai, which is designed specifically with the influx of tourists to Dubai in mind,” Niall McLoughlin, DAMAC Properties senior vice president, says. “Given the level of interest, we have decided to bring this tower at Capital Bay to market straight away, and present our first project which will be managed by NAIA by DAMAC in the sought-after Business Bay Area” he adds.