Ground has broken for a new 374-unit luxury apartment community on 5.3 acres in Tampa’s Westshore area.

“Westshore is an exceptional part of the City of Tampa,” said Crescent Communities Senior Vice President Jay Curran. “In addition to being one of Florida’s top employment centers, Westshore provides fantastic amenities for its residents, including restaurants, shopping, sports and easy access to the major roadways and bridges that take you to other areas in the city.” 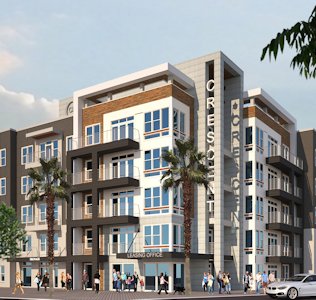 Residents of Crescent Westshore are just minutes from Tampa International Airport and less than a mile north of the I-275 exit to Lois Avenue, with convenience to downtown Tampa, its workplaces, and cultural and entertainment venues.

The design of the property provides residents with top-notch amenities including two resort-style saltwater pools, an outdoor grilling area and a sports courtyard with a full-sized bocce ball court. The community will feature studios as well as one-, two- and three-bedroom apartment homes.

“Crescent Westshore will have an urban feel, with a mix of on-site amenities and neighborhood conveniences that reflect the way people live today,” Curran said. “We’re excited about the potential of Crescent Westshore to raise the bar for luxury apartment homes in the Westshore District.”

This is the fifth multifamily community developed by Crescent in Florida in the last few years as well as its third in Tampa, aside from Crescent Crosstown and Crescent Bayshore. Crescent Bayshore, located on Bayshore Boulevard in the Hyde Park area, opened in October and was part of a landmark sale by Crescent where nine of its multifamily properties in Florida, Georgia and North Carolina were sold to two separate buyers. The nearly $700 million deal is assisting in funding Crescent’s growth and development plan across its business in targeted markets, such as Tampa and the Westshore district.

With ground broken, Crescent Westshore is scheduled to open in summer 2016. The community is financed by Crescent equity, with construction loans by Citizens Bank and Nationwide. Dwell Design Studio is the project architect and Summit was chosen as the general contractor.